I was in Kabul in 1979, and had to leave by a flight to Istanbul.  But memory is not reliable – hence the ‘faction’ category. 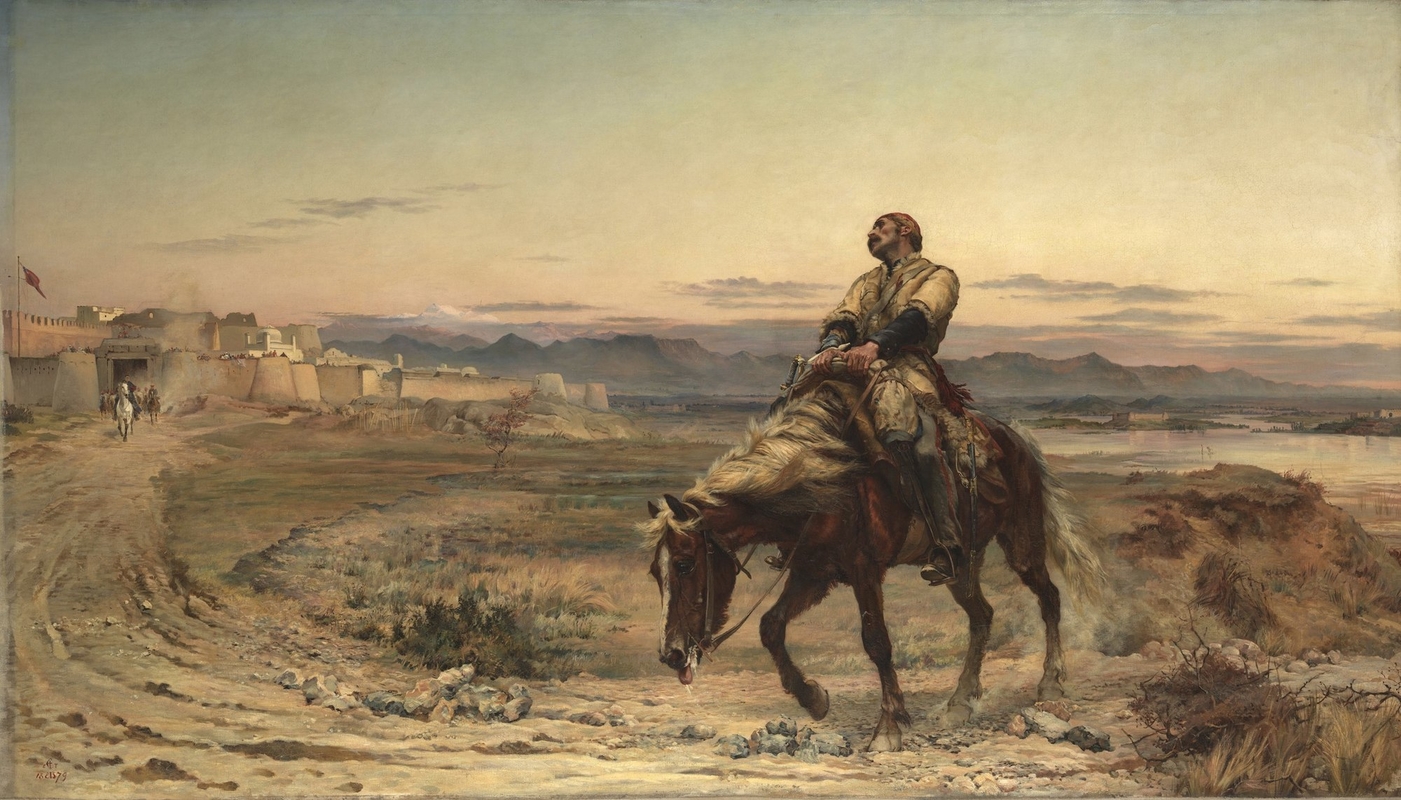 Remnants of an Army – by Elizabeth Thompson

In 1839, the British Army of the Indus marched into Afghanistan; to impose civilisation on its fractious peoples. The British force comprised 58,000 people, 30,000 camels, and a pack of foxhounds. A local Afghan chief remarked: “You have brought an army into the country. But how do you propose to take it out again?” In 1842, the sole survivor of that army reached Jalalabad on his dying horse .

Kabul 1979, and we were stuck, my girlfriend and me. We couldn’t go on to Iran, the boarder was closed, and we wouldn’t return to Pakistan, we’d burnt our boats in that direction. So, we lingered in Kabul, leaving our lodgings each morning to cross to the café run by Dani, a local who had catered for the now defunct hippy trail;  so we had the café mostly to ourselves; drinking tea, eating his omelettes, and occasionally smoking his hashish.

We should have read the signs. Arriving in Peshawar away from the plains down south we were already in a different country.  It was a dusty city with its face turned toward the frontier and the Khyber Pass. And in the back streets we could find the little workshops, with men crouching over newly finished copies of the infamous AK47. And we also saw the men from the hills, in their baggy clothes and the ubiquitous Pakol woollen hat; but I can’t recall seeing any  women.

On the bus to Kabul, we met Ali, who introduced himself as a student of politics from Islamabad; travelling to Kabul to find his uncle, who (we found out later) had found it prudent to be out of the country, due to being in the wrong political party. On the road Ali sat across from us and provided a commentary on the famous Khyber Pass. And the Pass, with steep hills on either side and fortified dwellings clinging to its sides. I asked Ali what was the purpose of the covered paths down the hill. He laughed – “to protect the locals from snipers– these people know how to hold grudges; they still talk about seeing off Alexander the Great’s army”. Passing a recently completed dam we saw, perched on its top a Russian anti-aircraft gun, pointing to the sky.

Kabul; a city of two parts. One part new, with modern buildings, good roads and Russian buses and cars, and the men and women in western dress: on the surface reassuring for a European. Then the old part, where we found lodgings,  and Dani’s café, while Ali went off looking for his uncle, joining us in the café later and bearing bad tidings. Iran was in ferment, as was Kabul, and the boarder was now closed to foreigners such as us. He advised us to return to Pakistan with him when he left.

Stirring more sugar into his tea, Ali gave us a short lesson in local politics. “The Great Game, the British called it; jousting with the Russians over control of this part of the world; that’s why the British invaded in 1839, in case the Russians might have wanted to. But the Afghani’s didn’t want either, so threw out the British, which meant a treaty of neutrality – we won’t invade you, and we won’t annihilate your army, or any Russian army for that matter.

The British are long gone, but the Russians now have influence here, as the government is communist, but the people are Muslim, and they don’t like godless communism, so things are brewing up. There has been a change of leadership – helped by a few bullets, and now the country is looking to America, who have replaced the British as anti-Russian. And my country – Pakistan, we don’t like the Russians because they help the Indians, so we will help the Americans. But the Russians don’t want America in here, so they are now on ‘manoeuvres’ on the boarder. And that is why, my friend, you cannot leave Kabul.”

I asked, will the Americans stop the Russians invading? And he pointed out that the USA did not have a handy army standing by, whereas the Russians…… So, we needed to leave, and the best bet seemed to be a flight to Europe. Next day we found a travel agent that got us booked on a night flight to Istanbul with Ariana, the Afghan airline. We bid our farewell to Ali, who, having found his uncle, was returning home, and the next time we met was in Islamabad two years later. And Dani; we didn’t feel good about his prospects, but he just smiled, telling us that as a Pashtun, he’d be returning to his tribal area, and get ready to fight.

On our last day in Kabul, I bought my own Pakol hat. Entering the café, Dani laughed and called me Sufi; and I wore that hat for the time I was in England. So, we got  on our flight to Istanbul on an old 707 where we found ourselves to be the only Westerners, the rest of the passengers seemed to be young men on their way to Europe with most having never flown before, as demonstrated by their inability to remain in their seats for long. The cabin crew seemed to find this annoying, as they kept themselves at the back of the plane for most of the flight.

Istanbul, that most beautiful of cities. Taking a bus from the airport we got off with a mile to walk through its streets, where we found a clean cheap hotel. And, to our delight we found some of our fellow passengers also booking in, still excited to be on the doorstep of Europe. Our journey took us south and on to Greece, but that is another story. And the Russians did invade, only to suffer the same fate as the British had in 1842. Helped along by the Americans the Mujahedeen forced them out, but only after 10 years of grinding war.

The Russians left behind a shattered country, in which the Taliban seized control. Which in turn led to the training base for Al-Qaeda, Osama Bin Laden , and the launch of terrorist operations world-wide. Inevitably, the USA and its allies (including the UK) invaded, and after many more years – and the longest war in its history, the Americans are also pulling out. What will happen next will most probably be another descent into civil war. But for my brief stay in Afghanistan, I will always have fond memories, of what was, and still is a beautiful country. I shall leave the last word to Kipling.

A scrimmage in a Border Station –
A canter down some dark defile –
Two thousand pounds of education
Drops to a ten-rupee jezail – (*)
The crammer’s boast, the Squadron’s pride
Shot like a rabbit in a ride! 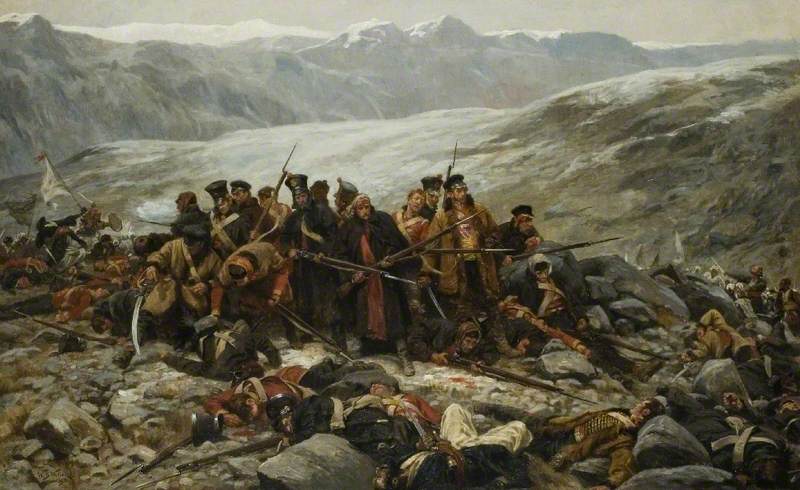 William Barns; The Last Stand of the 44th Foot at Gandamak Pass, 1842

Hellooo Dougie Wonderful paintings and poem, but your recollections are more real. Not sure why you put this in fiction, I guess you felt you couldn’t name names. Terrific piece of writing though. In 1979 all I knew about Afghanistan was the smelly suede coat that my younger brother spent a fortune on in ‘The Head in The Clouds’ hippy shop in Norwich (reminds himself to ask if it is still there) I was never into Hippism or modism or Rockerism or skinheadism. just another uniform as far I could see. I had enough of uniforms at school, forced to… Read more »

What’s this? You had enough of uniforms in school? Welcome to the club. I well remember finally plucking up the courage – on the top deck of a bus – to throw my school cap into the river as we humped our way over a small bridge. Everyone else had done it before me and had chided until I gave in. We all ran to the back of the bus to watch the cap sail well over the low parapet, at which point a loud cheering took place….. Three days later, some kind person who had been fishing, had the… Read more »

Last edited 1 year ago by griffonner

Thanks Guaj, its always rewarding to get a comment (hint!). With the fiction category (I’m now calling it faction); it was primarily due to accessing the ‘wells of my weed grown memory’; which I’m afraid isn’t pellucid where it comes to accurate dates, actual people, and the order of events. So, I prefer to let the actual events flow along with some fiction – but only to pad out what happened. And yes, my girlfriend an I were stuck in Kabul – two innocents. We’d been up in Chitral previously, and it was still then one of the last bastions… Read more »

Well, Dougie, you’ve done it again, and produced a highly entertaining and readable piece of fiction or ‘faction’. Nicely done.

You have delved into your memory bank of that time and place, and deftly delected those pieces that would be most interesting to the reader to bring forth to live again in print. You painted the scene well, and I, for oner, had no trouble visualising everything in my mind’s eye. Deserves comment from the readers, my friend.

Thanks Allen, always its always rewarding to receive a comment (yes, we know!). I’m just sorry I didn’t keep a proper diary; I used to send minutely written aerograms (remember them?) to my brother in Australia, but the writing was so small he had trouble reading them.
And I do think the whole unravelling mess in Afghanistan is a tragedy. I can see the Taliban
prevailing and if the government – which can’t even pay its own soldiers – does collapse, it will mean another descent into civil war.

Hi D, fascinating travelogue – thoroughly enjoyed it. What rankles with me is the need for any country to meddle in another’s affairs, which is the case with this part of the country. The Indian sub-continent is is a mess because of the Raj and the Partition, the Middle East the same with its drawing of unilateral boundaries which too no account of what there had been and the tribal nature of these places. People use the words “colonise,” “civilise” “enlighten” as if they have the sole rights to these fantasies of emasculated men, but the world thrives on difference,… Read more »

Thanks for the comments Bhi. Firstly, I like the League of Grumps – LoG’s as a fitting moniker for those of us who can set the world aright; I have some ideas on that. Next. Yes, overall I agree with you, that much of the suffering in the area we are talking about – North Africa to South Asia, has its origins in the colonial expansion of the ‘European’ powers – Britain, France, Russia, the USA. One of the overlooked aspects of the rise of radical Islam, is the failure of the secular movement such as the PLO, whose decline… Read more »