A Flag of Convenience

…and an unpaid bill. 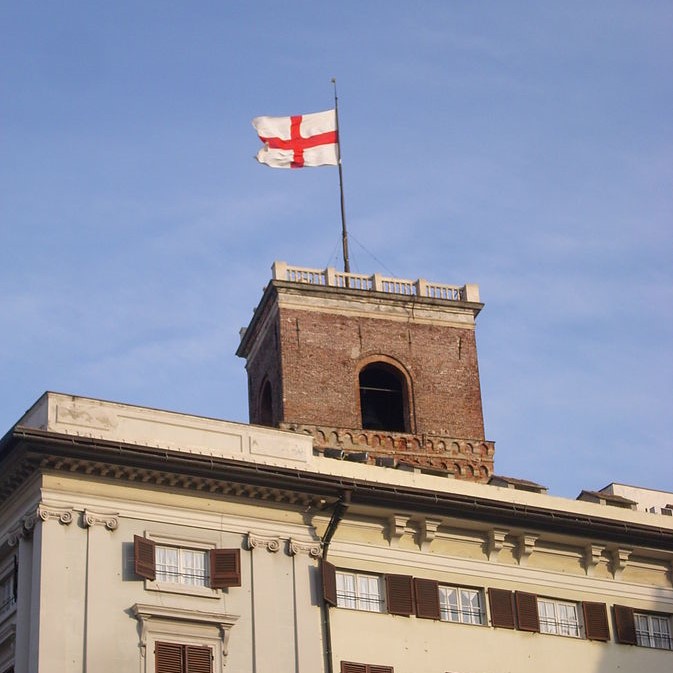 “Oi, Bert. Look what I found: a final demand. Somebody in Accounts has again forgotten to pay the bills on time.”

“What is it this time? Electricity?”

“Oh, it must be for those slabs that were laid in the front courtyards, but that was donkey’s years ago.”

“No, look for yourself. it is addressed to Frederick North and it says,

‘Dear Lord North, despite previous reminders we are disappointed to note that the annual amount stipulated for the rental of the Genoese flag is still outstanding. The last instalment we received was at the beginning of 1771.
Your country is now in breach of the agreed contractual payment terms It is now imperative that this amount is settled in full.

“Where did you find the note, Joe?”, asked his boss.

“In an old recipe book. What should we do with it?”

“Ms. Notsofast”, he said to his secretary, “take this to the legal department.
◊ ◊ ◊
Messrs Eagle-Eye, Quibble and Nitpick, three expert lawyers, pored over law books to determine if the company was liable for this debt.

“‘ We know the origin of this claim, said Ted Eagle-Eye. It started when King Richard – not so much a Lionheart as a wily fox – who was embarking on a crusade in 1190, found that the Genoese flag granted immunity to anyone who sailed the seas.
He asked the Genoese Republic to use the banner of St. George in exchange for paying an annual tribute.
A tribute that the British regularly paid until 1771, when out of the blue they stopped paying.”

“I would question the validity of the arrangement”, said Mr. Eustace Nitpick, “It was agreed verbally and not in writing.”

“Come, come Eustace”, interjected Ernest Quibble, “we must accept that a gentleman’s word is his bond.”

The other two accepted the argument with some reluctance.

“Even if we acknowledge the debt, the Statute of Limitation would come into force.”, said Ted.

Quibble, who liked to have the last word remarked: “Not if the debt relates to equity.”

The discussion was in danger to go off the rails, so Ted, being the senior partner, concluded: “Having examined the relevant facts we can safely say that any liability belongs ipso facto to the State and not our company.”

Ms. Notsofast, who had been taking the minutes, piped up:

“With due respect, gentlemen, it seems obvious to me that this demand is fake.”

Shaken out of their complacency, they asked:

By the fact that at the bottom of the page it says: the preferred currency is bitcoins.

The Devil is in the internet. I get one of these nearly every month. Last one was a claim for Covid compensation, all I had to do was send them my bank details.

I must be a multi-millionaire by now. I keep being told my balance has increased. I wonder who the kind donors are.

Nice one, Luigi!
A brilliant little escapade into history, the machinations of the corporate(?) body, and the ‘quibbling’ of the legal profession. Never forgetting the nice twist at the end. An enjoyable read.
Allen

A humorous diversion on international jiggery-pokery and fake news. Glad you enjoyed it. Thank you.

A highly entertaining story Luigi, and I can’t help asking – is there a kernel of truth in there?
Did the English get their flag from the Genoese, and did they pay rental for it? Please tell me its true!

Dougie, I am not a historian and can only repeat what I read on Wikipedia, which is this “There was a historiographical tradition claiming that Richard the Lionheart himself adopted both the flag and the patron saint from Genoa at some point during his crusade. This idea can be traced to the Victorian era, Perrin (1922) refers to it as a “common belief”, and it is still popularly repeated today even though it cannot be substantiated as historical. On the origins of the flag and its connection to the Genoese flag the Duke of Kent remarked in 1992: The St.… Read more »

So, when the ‘Ingerlish’ fans were not sticking rockets up were their brains resided (at Wembley), they were actually celebrating an ancient Italian flag?……PERFECT!

In a sense, Dougie but I doubt they saw the connection or appreciated the fact that collaboration between nations is possible.

So true, and I’m reminded of that quote – aimed at the Germans, but in my view more apt for the English ‘Individually the best of people, collectively the worst’; but that probably applies to any crowd. And congratulations on the Pick Luigi.

A Flag of Convenience
by
ionicus