I should tell you, he was a forceful man. Perhaps he had to be. Beware the wrath of Father, eh? 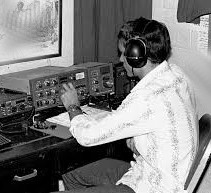 Oh, but then again, he had that loving paternal side: The one that found the time and money to let me pursue my childhood hobby of Amateur Radio for example.

Well, you started it in a way, didn’t you, Dad?

When I was barely four, Dad had already taught me how to make crystal sets. After work, he would bring home to me reels of bright shiny copper wire that I would string up across the garden as aerials, or wind around empty toilet roll cores as tuning coils.

There was a kind of camaraderie in that hobby in those early days. I used the word ‘sets’ plural because I had an all consuming interest in radio and electronics when I was young. Even at that tender age the tuning coils were not just for the ever popular ‘Medium Wave’ (doesn’t that sound old-fashioned now?), I had progressed onto ‘Short-Wave’.

Do you remember Mum’s surprise when I said I was listening to ‘the man speaking in the shed’? She went quite cold, didn’t she; thinking I was in touch with spirits or something!

I remember once, when I was probably about fourteen, he gave me the money to send away for an ex-army communications receiver… an R208 I seem to remember. Wow! That was a beast in those days. On one or two occasions, he actually had a twiddle with it’s dials alongside me… when he had time.

You worked hard too, didn’t you, Dad? Keeping us in food, and clothes, and all the other stuff that went to make our family life what it was?

But I guess, as happens as children grow up, my hunger for knowledge in electronics and the technology itself, bypassed him. He was left behind a little bit, and the camaraderie gradually disappeared. One day he said to me, “It’s a bit beyond me, Son.”

I became a proper know-it-all teenager, and Dad was daydreaming perhaps of the son who could build crystal sets; while I – the son – was on to transistors, thyristors, and other semiconductor ‘istors’ that were just names to him – or barely recognisable schematic squiggles on my many circuit diagrams.

Christ, I was an unthinking little whotsit, then! Wasn’t I, Dad?

That’s the trouble though. You know? When you’re young? You don’t see things as you do when you are older, do you? What’s that they say, “You don’t appreciate things until they’ve gone“? Well, it’s true. I know.  Now!

I bet, in all honesty, you’ve had a chuckle now and then watching me deal with my two girls, haven’t you? I know I would have in your position!

Yeah, I thought so!

When he left me, it kind of spurned me on to do more things with my life. Of course, by then, radio had faded because we were at the morning of the computer age. Dad wasn’t: He was at the dawning of a new life – the one he’s got now.

Sometimes, today for example, Father’s Day, I like to think that he is sitting beside me, quite au fait with my PC.  Well, he’s seen so many of them, now, hasn’t he: Commodore PET, Sinclair, Amiga, and a variety of other PCs including those that I build myself have come in between?

Plus, of course, he absolutely loved warm climates; they were good for his lungs. He wanted to go live in Spain because of that, but Mum didn’t want to. So he would have loved it here in South West France…

I often see him out of the corner of my eye.

You don’t mind me telling them, do you, Dad?

No, he doesn’t mind. He says he likes the internet.

Father and son, the eternal cycle; and I enjoyed reading this Allen; though my relationship with my own father may have been different, I can see the same patterns: the father tutors the son, until the son goes beyond him, but is forever looking back for approval.

Hello Dougie. Thank you for reading this and taking the time to offer me your thoughts. You are correct, I’m sure: These thoughts are by no means unique when people reflect on their relationship with their father – other than, those aspects which are, like ourselves, unique.
Blessings.
Allen

I would say, from my reading, that the relationship that you evoke, was one underpinned by love; and love can manifest in many guises; my own experience was not so positive; not being a daughter, more one of conflict – the older male resenting the younger, until I left home. Ah, parents!
Blessings
Dougie

I used to feel so desperate and ill-treated in part of my parental relationship. Only a ‘misplaced’ sense of ‘duty’ prevented me from divorcing myself from the disharmony. The point of my realisation that it was all for a purpose, gave me a new understanding of the ‘love’ that was involved. So your comment means so much to me, Dougie, for your reminder about the many forms of manifestation of love.
Allen

Conversations on Father’s Day
by
griffonner