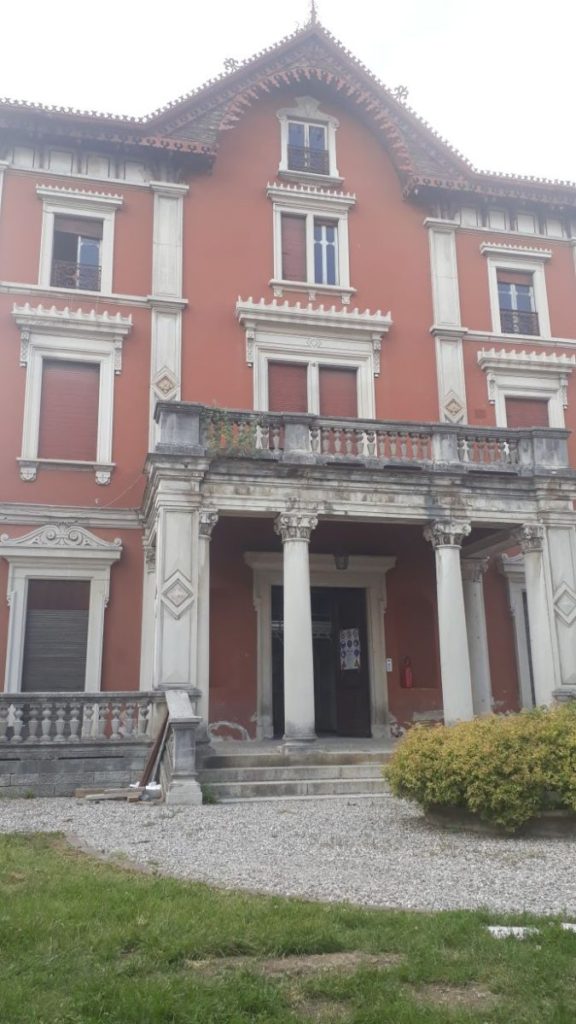 The 19th-century rusty-brown villa in which I lived since the age of 10, was quite imposing with a first-floor large balcony and a columnated front entrance.

Situated right in the middle of the town, facing the school and the piazza but fenced off from the main road, it had a long pebbled drive that went through the front garden from the house to a big wrought iron gate.

Originally, it may have been owned by an aristocratic or wealthy family but when we moved in, soon after the end of War World II, it had been changed into self-contained flats. My parents rented one on the first floor.

If the façade of the villa was impressive, the view from the back was fascinating.

In an annexe at the rear of the kitchen was a small utility room with glazed windows from which we were able to observe the exterior walls of two neighbouring villas with beautiful murals painted by local artists; a vegetable patch; some apartments with balconies above a pharmacy; two mountains in the background -one with a cross on the top, the destination of pilgrims at Easter time-  and a road, flanking a side entrance gate.

The building was still inhabited and in good nick -I thought- when I left in the 60s so I was surprised to learn that, after the remaining tenants went, it had been in a state of disrepair and closed for many years before the municipal authorities acquired it and was now being restored to accommodate a public library and council offices.

My immediate recollection, though, was of an incident that I would now describe as trivial but seemed important enough to a young child as to feel of being unjustly treated and put upon.

I usually spent my free time playing outdoors with other kids. One particular weekend two friends of my parents, Eugene and Marguerite came to tea.

Eugene had passed his driving test but on his first outing had landed the car in a ditch and decided that such a vehicle was not for him. He came instead on a Lambretta with his wife riding pillion. They parked the unlocked scooter in the road below the villa, by the side gate.

I was ordered by my father to stand by the windows of the utility room and keep watch on the motorcycle in case it got stolen.

It was no use remonstrating, I had to do what I was told and had to keep my eyes glued to the unsecured transport. By the time the guests departed it was dark and there was no time left for me to play with my mates.

My dislike for motor scooters lasted a long time and, though it seems churlish, I never rode a Vespa or a Lambretta.

I can’t decide if the aversion was caused by a subconscious emotional reaction to that old episode.

It’s strange how small pieces of life’s jigsaws stick in our minds. Having one’s playtime plans thwarted is a reasonable enough excuse to avoid scooters. But wasn’t it the law in Italy that everyone had to ride around Rome at least once on/in scooters or open-roof Fiat 500s accompanied by pretty girls wearing headscarves and heart-breakingly beautiful smiles, along with crazy camera angles and beatnik music, directed by Federico Fellini?

In hindsight, I wish I had done all that, but I was too young for the ‘Dolce Vita’, Steve.

A charming vignette. Fascinating how memory works and we trace back to a point pivotal for us.

Odd that certain incidents that seemed of paramount importance at the time can, in retrospect, be seen simply as the unnecessary resentment of a recalcitrant child.