Although never previously published, I have rewritten this piece extensively. Thirteen years later I can review those words and thoughts with less emotional involvement, but, I feel, with razor-sharp truth. 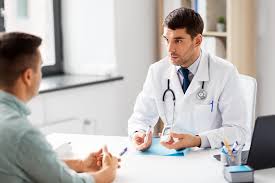 I hear words that make me think: When was the last time you were kind to me?     I’m thinking it but not saying it out loud.

That’s even if I could say it out loud.    For six months I have endured a virtually voiceless existence – which I thought started one day last December: The day when I woke up and discovered that my voice had become a shade croaky, but in reality may have actually been ‘coming on’ for a couple of years.

The ‘phone is being held up to my ear by my not very steady right hand. I can feel the whole of me about to tip over the precipice. I try to control it, but here I am, about to become sixty-four years of age, and I can truthfully not remember a previous time when she was truly kind to me.

Finally, it is too much, and I pass the ‘phone back to my wife, hiding my face from her – able to hide the tears, but unable to disguise the sniffles they bring along.

Where did her words, “My sweetness” come from?    Or is it that she just knows which button to press!

And talking about things coming, where did a ‘huge polyp’ come from? And in just eight weeks!

“You have a huge polyp on your right vocal cord.” He announces.

He says it in the way that only a man who knows the complete ins and outs of your ears, nose and throat could.

There is an assuredness about the way he says it, and he says it as he expertly removes his latex gloves and seemingly absent-mindedly rinses his hands in the clinical stainless steel sink to the side. He can’t help it. He has become a clinician, as hard and practical as his sink. He is, without doubt, in complete command of the situation, but for a moment has lost track of how to relate to people in a thoroughly down-to-earth way.

He marches, confidently, to reclaim his chair at the command side of the desk. I sit the other side, but I must confess to being a tad shaky at his words.    I can feel how those words have effected me.      Am I hiding it well?    I think so.    However, I’m not so sure if the shakiness is the result of the diagnosis or the speed with which it has been reached:

After all these weeks of being bounced between one doctor and another (with endoscopes so used to pot-holing their way through my nasal cavity and down my throat that they could do the journey blindfolded) a rapid diagnosis is a complete surprise.    The last ENT specialist, only eight weeks ago, had pronounced – for the third time – that there was only inflammation, and… “No, no sign of anything like cancer!”      Now, in what seems like seconds, this man has proclaimed it: I have a growth.

I’ve spent a lot of time on the Internet researching ‘throats’ during the past six months or so, and I am well aware that the word ‘polyp’ is a kind word.    ‘Tumour’ isn’t a kind word; it’s a harsh one.    But I know, kind or not, they are both ‘growths’, and there’s no getting away from that.

So, is it kindness on his part choosing to tell me that I have a ‘polyp’ – even if it is ‘huge’?

Back to the ‘Phone Call:

She continues to be ‘nice’ to me. Is it because she fears, now that I’m threatened with serious illness I might predecease her?    I kick myself regularly for having such devious thoughts about her, but then, after the call is concluded, my wife helps me rationalise everything by reminding me of all the things she’s done since we’ve been married.

‘Listen to yourself…’ She says. ‘We’re talking about the woman who has never… NEVER… in all of these 35 years… remembered our wedding anniversary… NOT ONCE!

‘The woman who took a bread knife to you on your twenty-first birthday.    Who took a knife to our thirteen year old daughter just because she didn’t say good-morning to her!      Be bloody realistic!    Do I have to go on?’

No. She doesn’t have to go on. Those ‘bad’ things just go out of my mind when I’m struggling through the goo of my chaotic emotional blindness.    You are supposed not to feel like this, so when I do, it creates turmoil inside my head. I’d love to be free of it.

So, I rationalise the situation: the way I am reacting is the result of conditioning, not nature.

I kiss my wife’s hand.  What she has said, the hard words, the truth, were given with love. It is her nature to be loving and kind.

After the Operation, I Slowly Reclaim Consciousness:

There is no light to say,

no sounds to help me gauge.

I stare into the darkness

trying to ignore the remnants

of long passed images that flit

aimlessly across my brain.

Trying to gain that foothold

to fresh territory inside my head,

in that place where there is

only possibility, only potential.

Beyond the door. Beyond.

Where there is life and light;

the young nurses ply their trade…

petal-soft as a cherub’s skin –

with lives and problems

well divorced from mine.

A Little Later the Surgeon Arrives:

“Have you tried to speak yet?” He says, standing at the foot of my hospital bed.

Do I open my mouth and say something?  Yesterday, if I had done that, no sound would have come – just a kind of whisper.

It never ceases to amaze me, looking back, how frightened I was to answer him. But I tentatively opened my mouth and produced the sound of “No.”  It was effortless. It was a perfect word. I was filled with adoration for this man’s skill.

“Well, there you go. Just don’t speak too much, however much you may be tempted. At the moment you are still on analgesics, the more you let those vocal chords rest the less sore they will be when they wear off.

I never thought about that before. But yes it did sound like me. “Yes it does!” I said, delightedly.

“Good, now get a good night’s sleep. I’ll be in to see you in the morning.”

Not more than an hour later, my friend arrives, as arranged, and gives me the card she has chosen for me to give my wife.

‘I love you today as ever before,

Thoughts of continuance have returned.  They are kinder to me than those that foresaw the curtain falling.

Griff, Thank you for sharing this. This is an extremely well recounted piece. It is amazing how a word can trigger so much emotion, and especially when the person delivering that word is your mother, no matter the past. There were just a couple of instances of overwriting – and this is just my opinion: I can feel the whole of me about to tip over the precipice, over the edge of a deep bowl Do you need the “over the edge of a deep bowl”? for me the “tip over the precipice” suffices. Then you use it again here:… Read more »

Thank you for reading and commenting, Bhi. I am much obliged and have made some alterations which, I agree, remove a bit of verbiage!
Allen

Last edited 2 years ago by griffonner

Your powerful piece shows just how strong bonds can be despite what appears to be mental instability. If only writers of fiction could get these deep insights into their work.

Thank you for reading and commenting.
You are spot on.
I nowadays attribute the mental instability as having its roots in an over-the-counter medicine available in the fifties aimed at women wanting to lose weight. Preludine. That means, in fairness, the actions were not driven by lucid intention. But try telling my dear wife, who put up with all that for forty-five years! It is a hard pill to swallow.