To Be or Not To Be a Poet

That is the question. 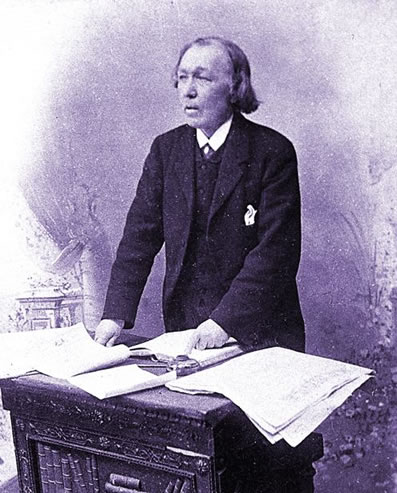 In choosing my career I thought long and hard.
I scribbled, told stories, but got nowhere fast.
My intent was to be famous like the Bard
or other great poets who lived in the past.

I had to choose one who was not only bright
but, furthermore, he had to be a Briton.
I read some of his verses and saw the light;
I recalled his name, which was Bulwer-Lytton.

The start of one poem was found abhorrent
but for the life of me I can’t see what’s wrong
with stormy nights and rain falling in torrents:
the same line was used for a popular song.

Therefore I decided that what I wanted
was to be a medium so I could call
the soul of a poet who hadn’t been taunted
but who came through was William T. McGonagall.

He was a person with a lot of pizazz
delighting and appalling his audience.
A polished gem, whose middle name was Topaz,
dismissed derisions and never took offence.

Humiliating snubs weren’t what one would wish
but at his readings an unruly crowd
would make impolite catcalls, throw rotten fish;
a rowdy behaviour that shouldn’t be allowed.

I had to conclude that you have to be tough
to withstand the attack of scathing critique.
A creative intellect is not enough,
you have to have an exceptional physique.

Thanks for your observations, Jim. We all suffer our critics’ slings and arrows and not always with fortitude.
Best, Luigi.

That’s so much fun to read, Luigi. I hadn’t heard of Bulwer-Lytton so did a search that sent me to a website where I’m sure I’ll be spending a lot of time in future. As for McGonagall, I had no idea he inspired Spike Milligan, so that has to be worthwhile.
So good to see the site running so well again and such lovely work from everyone.

Hi Gee. I thought that everyone was familiar with the famous (or infamous) line “It was a dark and stormy night” and its author Edward George Earle Lytton Bulwer-Lytton.
As for McGonagall, not only was he Spike Milligan;s inspiration but he also published over 200 poems. Unfortunately for hm, he has been widely hailed as the writer of the worst poetry in the English language.
The site seems to be running fairly well, even though a lot of the old stuff (from the archive and old ‘picks)’ keeps reappearing on the front page.

Ah, McGonagall, my favourite poet! who can forget his immortal lines on the Pentland Hills ‘Though of a barren appearance and some parts steep/ They are covered with fine pasture and sustain flocks of sheep’. You could not have better role model. A worthy addition to the canon.

thanks for sharing Luigi

in fact, write and let read.

I’d be happier if everybody was writing not reading whether they do let read or not.
Writing is a great method to survive in this clown world and a great therapy for psychological disorders.
x

I can appreciate that writing may be good for the soul, but surely you want to share the fruits of your labour with your fellow writers, at least?

I want all people to write even short diary entries or short poems and forget about readers, nobody will ever have to read them and they don’t have to read anyone. Free to share and not share, but what has been shared cannot be unshared. Painting has the same effect and other arts too. It’s helping you create a better privacy, control it. Most people whether they have understood it or not are in a post-traumatic shock, their birth. This disorder follows most of us in our childhood which is the indoctrination period for the state. Later we have society… Read more »

à chacun son goût, as the saying goes.
Thanks for the comment.

Hi Verb. Glad you like this. Thanks for letting me know.
I am not sure but I think the ‘thumbs-up’ and ‘thumbs-down’ icons below the comment are intended to show appreciation or displeasure with the piece. On the other hand they may refer to the comment itself. I shall ask the webmaster.
Best, Luigi

Thanks. I took the thumbs to reflect the comment. Perhaps it is nicer to take the time to comment even if there isn’t a lot to say.

Yes, I believe you are right. Strangely enough there is a ‘like’ button on the Forum

I think all of us ‘creators’ are mediums of one sort or other, Luigi. Like Gee you led me on a path of research for otherwise unknowns to me. Thank you. 🙂

I was under the impression that everyone knew those two famous or infamous names, depending on one’s point of view, but it looks as if they are generally unrecognised.
They were ‘creators’ like us, Allen, and were often vilified as we all are at times though hopefully not to the same extent. I don’t know if your research found the quality of their work acceptable but at least it added to your knowledge. Glad of having assisted.
Luigi

To Be or Not To Be a Poet
by
ionicus