I stood where Hitler stood.

This was indeed a disturbing place. (with pictures and music…)

Originally published on October 22, 2004 in Non-Fiction

If you leave the market square and walk up towards the Burg (castle) you would be forgiven for not noticing the Palace of Justice on your right. It is not glaringly obvious unless pointed out. After the last war, this court was the only one left in the whole of Germany, large enough to hold the war trials. Bombs had destroyed all the others – Nuremberg was of course the breeding ground for the Nazi party, read on… 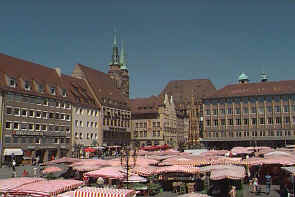 When you arrive at the Burg – truly a mighty fortress, you are taken to the viewing area overlooking the city of Nuremberg. First you are invited to look at a picture of the city before the war – then to step to the right and look at a picture taken from the same point after the war. Nothing is recognisable – indeed all that can be seen is utter devastation and rubble. Not one building seems to have survived. You are again invited to move to your right, then you see the city as it is today. Incredibly it appears to be an exact copy of the pre-war picture. It seems the palace of justice was the only building to survive. How strange is that? Praise indeed must be given to the people responsible for re-building this wonderful city.

Nuremberg has a population of about half a million people. Its history goes back over a thousand years. The famous Christkindlmarkt, dates from 1628 and attracts many thousands of people each year, annual visitors to the city exceed two million. The Christmas market takes place in the large square under the shadow of the equally famous Frauenkirche, at the opposite end to the church is the famous ‘Schoner Brunnen’ (beautiful fountain). Many years ago a ring appeared over night through the metal work of the fountain. No one has yet been able to work out how it was put there – there being no joining in the ring. It indeed is a big mystery. It is said that if you turn the ring and make a wish – it will come true. 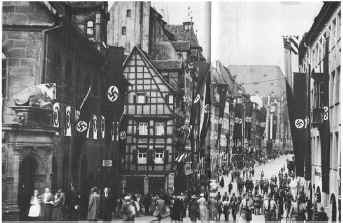 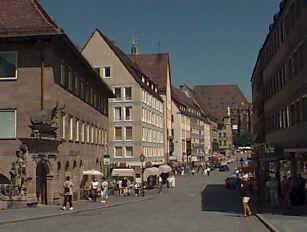 The stalls in the Christmas market sell toys, decoration, candles of every kind, plus food and drinks. The Gluewein, served in special dated mugs that people then keep, is wonderful stuff, especially if accompanied by a roasted sausage.

Because I was studying in Erlangen, a university town not far from Nuremberg, I was able to get into the city on a number of occasions. It was on one such occasion that I was invited by a friend to go to the infamous Nazi Rally area. I had always found plenty to occupy myself with whilst in the city, and although aware of this area, I had never considered going there. Having been convinced by my friend that it was interesting I agreed to go. On the cold and dismal Saturday afternoon of our visit, we found ourselves alone. To say it was eerie would be an understatement. 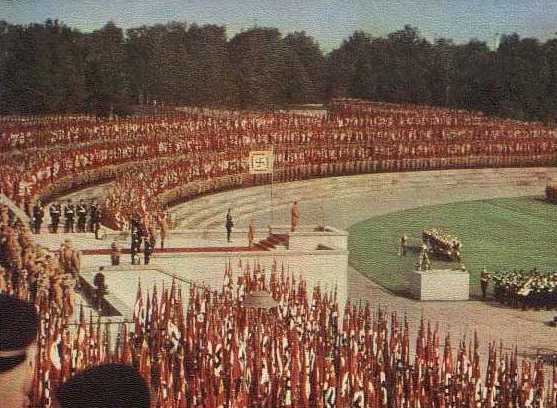 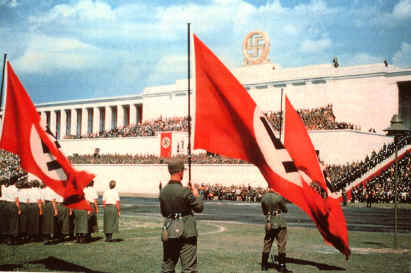 The Nazi rallies sometimes lasted a whole week, it is said that up to a million troops would take part. The area of the Zeppelin field where the major events took place was still clearly discernible, although it had been reduced in size. The main grandstand area which is claimed to be a copy of the Temple of Diana at Ephesus, was still there, although also reduced in size. The grandstand was built under the management of Albert Speer between 1934-37. It was intended to last for thousands of years! To add to the atmosphere, the Zeppelin field was ringed by flags during the rallies, with powerful searchlights pointed to the sky over the stadium. 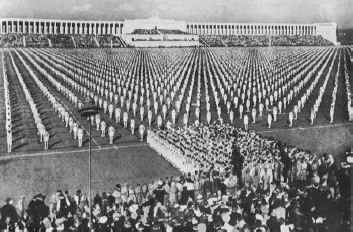 After the war, American troops blew part of the grandstand up to erase the Nazi symbols, reducing it in height by about a half. It is easy to see how inspiring it must have been in its full glory. In the seventies the Americans again reduced it in size to detract more from its original glory. 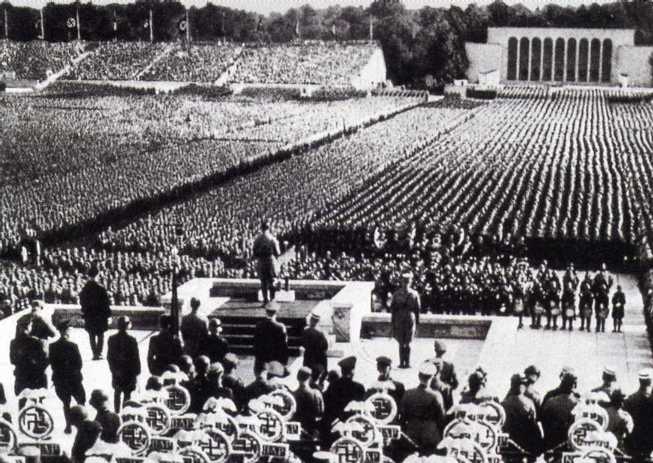 The Rostrum where Adolph Hitler stood to make his famous orations is just as it was all those years ago. It is said that the siting of the rostrum was worked out by the position of Lay Lines to give him [Hitler] maximum power. I climbed up the steps and walked onto the podium. Looking out and round, it was not at all difficult to imagine the massed ranks of troops stood silently – and then erupting into mighty salutations; This was a disturbing place indeed! evoking in me a strange feeling. The buildings of the Gestapo headquarters, were still standing to the right hand side of the stadium.

I am pleased in a way that I was able to experience this visit, having lived through the war and having seen films of Hitler making his speeches from this spot. I can also remember the war trials very clearly. However I was never tempted to go back to that area.

Nuremberg is served by an international airport, and a superb transport system, including tramcars and a subway. It is a very beautiful and interesting city, please try to visit it if possible. Further south is the wonderful city of Munich – another city badly damaged and rebuilt. The Olympic stadium is a must visit. Further still down the autobahn is Garmisch-Partenkirken, under the mighty Zugspitz, where I learned to Ski – but that’s another story. 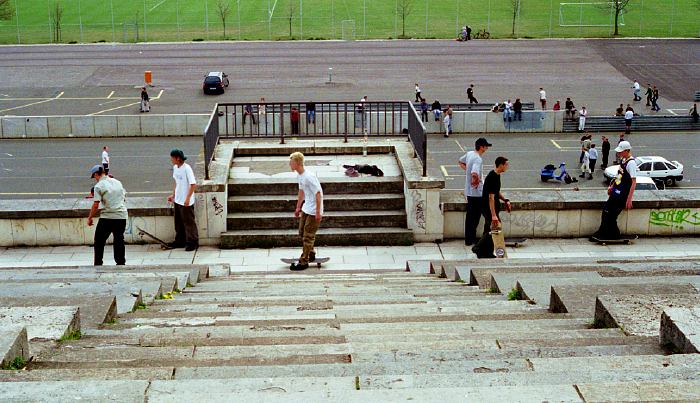 The first two pictures are of the market-square before and after the war. Can you spot the changes and the fountain? The second two are the road to the Burg – pre and post war.

The other pictures are of the podium from different angles, with Adolph Hitler pontificating to his troops. The picture of the athletic display gives an excellent view of the grandstand in all its glory. The area seems to mean nothing to the modern youth.

The beautiful music is from Wagner’s Lohengrin – claimed to be Hitlers Favourite Piece of music.

Enjoyed the read Gerry, not been to Germany at all. The pictures helped to bring focus, not wired for sound this morning
Mike

Thank you for your comment Mke. It’s pity you didn’t get the sound it is quite significant to the article. Bavaria is a lovely part of Germany.
Regards
Gerry.

Goth thank you for comprehensive comments. Wagner is one of my favourite composers, along with Mendelssohn! (with regards to Hitler it at least proves that he had some emotion in his body) I had some interesting times in Germany and met many interesting people of my era, (mostly stating that they hated Hitler) but they would – wouldn’t they? When I learned to ski in Garmich I was with a Jap and a Turk both old enemies but we got on okay. (they didn’t teach me to ski though) I had to teach myself 😉 By the way do you… Read more »

The photographs enhance a well researched and written article about the breeding ground of the Nazi.
Most interesting, Gerry.

Thanks Luigi. I know it wont be everyone’s cup of tea – but glad you found it interesting…
regards
gerry

I stood where Hitler stood.
by
gerry