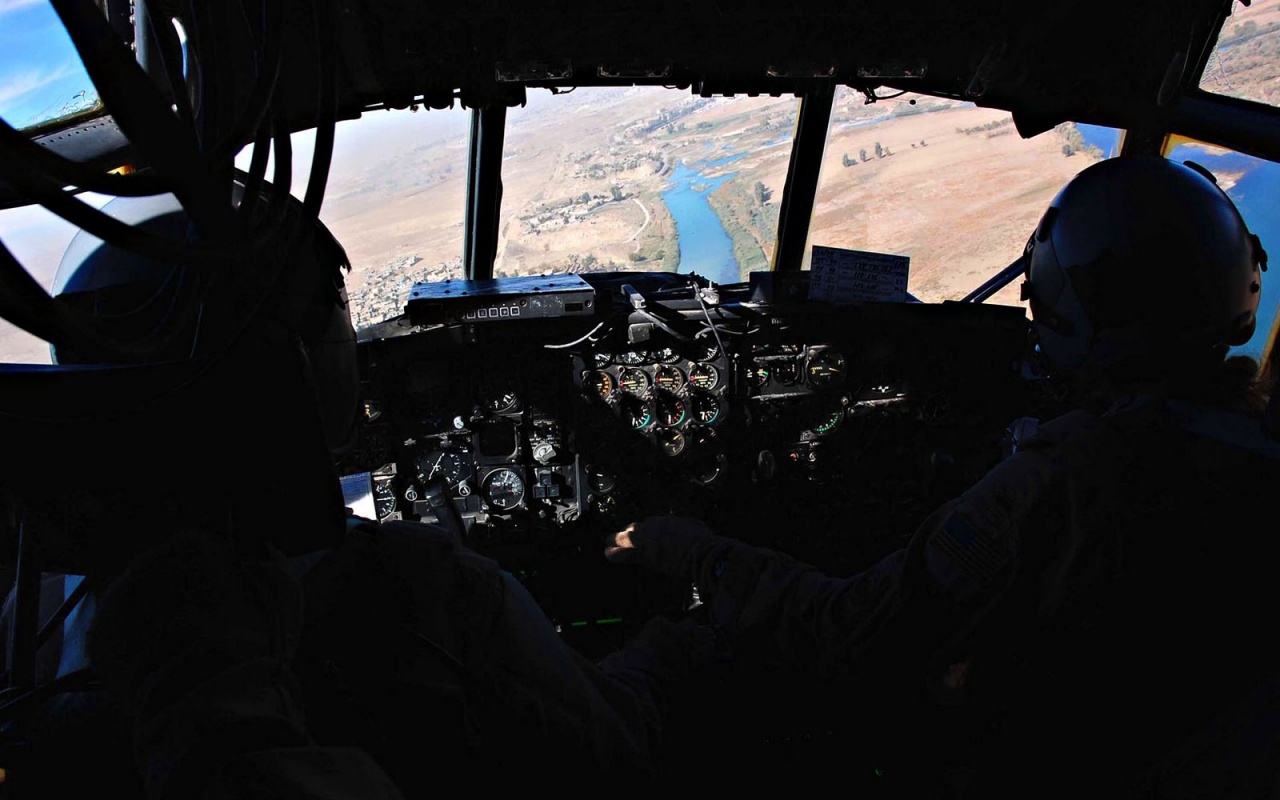 A little more rambling from my disreputable past.  The picture was taken by our Flight Engineer.  I am in the right hand seat.  We were en route to bombing Milton Keynes.

There comes a time, alas, when advancing years make one less suitable for certain occupations.  Although I was still sound in wind and limb with a Class One air force medical and all vital organs functioning in the appropriate manner, the powers-that-be had decreed that pilots over a certain age would not fly the Lightning.  Although quite easy to fly, the Lightning was very fast, even by today’s standards and a one second lapse in concentration at top speed would use up over two thousand feet of real estate.  That’s a lot.  Work it out.

The venerable Lockheed Hercules on the other hand proceeded at a stately three hundred and seventy miles per hour and was considered a suitable mount for a pilot in his dotage.  With a degree of apprehension, I travelled to the Operational Conversion Unit at RAF Brizenorton to meet the tormentors who would introduce me to the huge four-engined beastie.

Ground school lasted two weeks and every system of the aircraft was covered in minute detail.  I was easily the most senior in both age and rank in the class, most of the attendees apparently having only recently attained puberty.  Finally, and only when we had achieved the pass mark in the examination we were to be allowed to lie with our bride.

Although a very large airplane, the Herk is a nimble animal, capable of operating from a very short strip and from all types of surface.  It carries a crew of two pilots with a fold-away seat for an instructor pilot, a flight engineer a Loadmaster and usually several other assorted people most of whom are only there for the ride.

My first attempt at a take-off was hardly a spectacular success. I was unused to the flight deck being so far off the ground and astonished by the very low speed at which the machine could become airborne.  Still firmly on the runway at over a hundred and twenty miles per hour, the captain suggested that if I really intended to taxi all the way to Oxford, I should turn left at the airfield gate.

“I have control,” he said and hauled mightily on the control column.  We soared into the air at an angle seemingly inappropriate for such a big aircraft.  We levelled out at four thousand feet and I was allowed to take control again.  Being accustomed to the Lightning’s instant control response, I found the Herk quite sluggish but very pleasant to fly.

When we returned to base, my instructor announced that he would demonstrate what is known as an Assault Landing.  That is a landing in as short a distance as possible, coming to a full stop with the rear loading ramp lowered to allow swift discharge of any troops that might be on board.

We arrived over the airfield at one thousand feet.  As we slowed, the nose went down and we dived towards the runway.  Just as it seemed that we were destined to become an integral part of the airfield, the nose came up and we settled onto the tarmac with a little squeak from the wheels. With all four engines roaring in reverse thrust, we stopped in a little over a thousand feet. Your holiday Boeing 737 needs three times that distance.

As time progressed and I became comfortable with the machine I quickly grew to love the big amiable beast and was reasonably accomplished in the multitude of tricks of which the aircraft was capable.  Although it would be some time before I could command a Hercules, I frequently took part as co-pilot in various exercises such as air drop of supplies and flying the Paras for practice jumps.

On one occasion, we departed Brize with sixty Parachute Regiment troops for an air drop exercise over Salisbury Plain.  The Paras went out at five thousand feet, their square chutes opened by a static line attached to the aircraft.

When the last of the leavers have left, it is customary for the delivery aircraft to circle in the area to watch them to the ground.  We circled a few times then the captain grinned at me.

“I have the aircraft,” he said.

We flew out from the zone for several miles, descending all the time until we had gone down to five hundred feet.  He turned back towards the drop zone.  I watched with some concern as the radio altimeter crept towards the hundred-foot mark.  And we were still going down.

Thirty feet.  He lowered the rear ramp.  The noise level was almost unbearable.

Ahead of us I saw a collection of vehicles and clearly visible was a gaggle of people looking through binoculars at the troops who had landed a mile or so ahead of us.

They never saw us approach from behind and clearly did not hear us.  We swept overhead at two hundred miles per hour as they dived for the ground.

A steep climb and a huge grin from the captain announced the end of the game.

We flew around for another forty minutes and then returned to base.

When we had taxied to our parking slot and shut down, we were met by a rather worried looking young officer.

“Wingco Flying would like to have a word with you and your crew, sir.”

Tank Stevens, the captain said that we would be there as soon as we had de-briefed.

Together we trooped over the the Wingco’s office.  Tank knocked on the door and a voice from within bade us enter.

Although the Wing Commander was doing his best to look stern, it was apparent that his shoulders were shaking and the wing warrant officer was staring fixedly out of the window.

“I have just had a very angry phone call from a Colonel Barrett.  He claims that a large aircraft passed over his visitors at a very high speed at an estimated twenty feet from the ground.  He also claims that the rear ramp of this aircraft removed the whip aerial from his armoured vehicle.  He wants an immediate investigation and appropriate sanctions applied to the miscreant.  Some of his party were visitors from the Dutch Air Force and a couple of Saudi trade officials.  He is mightily pissed.”

He stared at his hands.  The warrant officer sniggered quietly.

“Were you in that area by any chance?  Salisbury Plain?  About an hour ago?”

“Sir, we know the rules about low flying.  I believe that there were several other aircraft in the area as well as us.”

“Of course.  I just wondered if you had seen anything or heard any radio traffic.”

He turned to the Warrant who was unsuccessfully trying to hide tears of laughter.

“Nothing, sir.  I was just thinking what a vivid imagination these Army blokes have.”

“Get out of here you three,” he said to us. “No more games. Understood?”

“Us, sir?”  Tank assumed an air of innocence.  “We are professional aircrew.  We don’t do games.”

“You owe me, Tank.  I will deal with the Colonel’s injured sensibilities.  Next time, add a couple of hundred feet.”

He was laughing as we left the office.

“I hope they have a decent supply of trousers in the Army stores.”

Nice one sky. I think they had the Herks at Dishforth in Yorkshire, I flew from there (as one who was there for the ride) 😉 but not in a Herk. I was in the RAF in 1957 – I think maybe a bit before you – I also have memories of being in trouble for being a bit naughty. Always a pleasure to read stuff like this.
gerry.

I remember Beverly aircraft being at Dishforth. 11,000,000 rivets flying in close formation!

Loving your stories mate. Nice to see everything laid out easy to read. Written with confidence and style.
Mike

Many thanks Mike. Good to ‘see’ you again!

Excellent stuff Goth. I had no idea that you were in the Services at the same time as I was. Wonderful memories. I adored the Turkey but never had the balls to leave one in mid-air. I always had massive admiration for you guys!. Many thanks for the comment.

Enjoyed this one too!

Thanks Griff. It is simple stuff and uncomplicated but fun to write and fondly remembered.

The Colonel’s Trousers
by
skytrucker