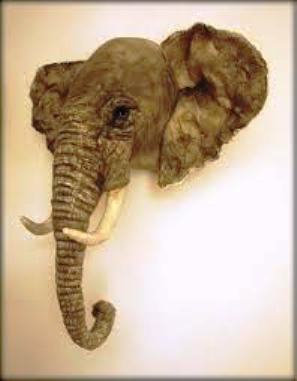 I am told that Uncle Mortimer was a hunter who went on safaris and always
came back with a trophy. Judging by the heads of exotic animals stuffed
and framed on the wall, he must have been a very good shooter.

Among the vast collection one could see the medium-sized head of a springbok,
that of a panther and even one of a snarling crocodile.

I wish I could have met him. I would have liked to hear him recounting
his adventures but as he had departed to happy hunting grounds I had to
be content with my Granny’s second-hand account.

How he had relentlessly pursued an elephant, finally managing to bag its
head. It was in his opinion the biggest triumph and his proudest moment.

That had taken pride of place on the wall with the other victims, but what
intrigued me was its absence on the trophies’ parade.
An empty space was the only indication that at one time or another that had been the chosen location.

It was the result, Granny said, of the ‘incident’.

Uncle’s stunts generated a great amount of outrage for the slaughter of
endangered animals but also a lot of interest from the press.
Despite demonstrations, a celebration of the feat was organised by the
villagers who were in sympathy with the lord of the manor.

While posing underneath the pachyderm’s skull, with photographers snapping
away, the heavy frame fell from the wall and crushed Mortimer.

Being an animal lover I just hope Mortimer suffered quite a bit of pain – before he passed to the happy hunting grounds…;-)
Nice little short Luigi.

Being an animal lover I just hope Mortimer suffered quite a bit of pain – before he passed to the happy hunting grounds…;-)
Nice little short Luigi.

He met his death head-on, Gerry, and that head, weighing a ton., gave him more than a bit of a headache.
Glad you like this short.
Best, Luigi.

Hi Luigi,That is what I call Murphy’s law, or sod’s law,whichever you like. The poem made me chuckle. Be lucky Peter.

You can say that he got his just desserts, Peter.
Glad you enjoyed this short piece of prose. Many thanks for stopping by.

That phrase came to mind while I was writing the piece, Trevor.
And you are right, in the penultimate line the word is ‘crushed’.
Glad you are enjoying these short stories and I shall endeavour to come up with some more.

The Trophy Wall
by
ionicus