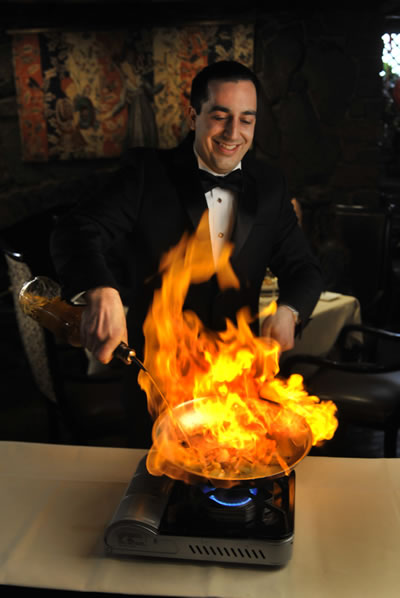 The curious title of the book prominently displayed in the bookshop’s window caught my attention. It read “NO MORE WAITING” and I wondered what the author had been waiting for. When I saw his name, the penny dropped and I understood.

I first met the author, Gabriel, or Gaby as he liked to be known when I worked in a so-called ‘posh’ French restaurant waiting at tables and we became colleagues.

We had separate, but adjoining, ‘stations’ to look after and I, being a new boy, was able to watch him hoping to learn the tricks of the trade by observing how he performed his task.

He worked wonders with a flambéed Steak Diane. The flames he produced by igniting the meat drenched in brandy were like colourful pyrotechnics and drew gasps from the diners.

He was obviously a very experienced chef de rang but I noticed a certain impudence in his conduct, especially towards young female customers.

He would show them the sweets trolley and, with a wink, suggest that they should try the ‘cannoli’, long cylindrical pastries filled with mascarpone cheese or fresh cream.

The sexual connotation wasn’t lost on the demure girls who, though amused, pretended not to have understood the innuendo and would choose a profiterole or a crème caramel instead.

We worked alongside but it never occurred to me that he may be gay.

In those days I lived in Goodge Street, just around the corner from Dino’s Bar and within walking distance from my place of work.

One afternoon I was off duty and popped in at Dino’s Bar to say hello to the proprietor and his wife Ruth, both friends of mine.

He was busy in the kitchen from where he emerged to place a tray of hot mini pizzas on the counter. We exchanged a few words before he hurried back.

After choosing one of those savoury delicacies, I looked around the room which had just one table occupied by two pretty girls drinking cappuccino.

One was a redhead who seemed receptive to my attention, casting sideways glances at me.

As I was planning my course of action, who should walk in but Gaby.

“Fancy seeing you here”, I said and realised he was the answer to my prayers. Together we could chat up the two young ladies with a view to a double date.

When I whispered the proposition to him, he turned it down saying that he had a busy schedule.

In the meantime the girls had risen, paid their bill, and left.

I was a bit miffed especially as Ruth, giggling, teased:

“Don’t worry”, she added, “ You shall have another chance; she works across the road and comes here fairly often.”

Gaby had sat at a table, looking sheepish. I asked Ruth to bring us two espressos and joined him.

“I’m sorry I couldn’t oblige”, he explained, “ and I want to be frank. My sexual orientation is not heterosexual.”

“But I’m not ashamed to admit it.”, he added defiantly.

I thanked him for his honesty and said no more. The atmosphere between us remained cordial and respectful all the time I knew him.

Employment in the catering industry is volatile and staff turnover high. It was no surprise to me that Gaby left for pastures new soon after that revealing conversation but not because of it. The demand for skilled labour was such that restaurateurs offered higher salaries to attract the right people.

I wasn’t at all sure if it was the right career for me but endured it for a few more years, even though I changed jobs quite a few times.

It was during one of these occasions that I saw my ex-colleague again. Having accepted a suitable position in a small, but prestigious restaurant in another part of the city, I was looking for local digs.

I met him, by chance, outside an overground station of the District line and after a few pleasantries I brought him up to date about my situation. I could not believe it when he said:

“It must be your lucky day; there is a flat vacancy in the house where I live. I’ll introduce you to the landlady, Mrs K.”

The so-called ‘flat, highly prized being in an elegant area, was also highly-priced. It consisted of a single large room and the use of a shared kitchenette on the first-floor landing and a communal bathroom on the third floor.

My room, on the second floor. was sandwiched between two small single rooms inhabited by two young females, one of whom I came to know, eventually, in the biblical sense, but that is another story.

On the third floor, next to the bathroom, was a kind old lady who could have been my grandmother.
A basement flat was occupied by two airline hostesses and a ground floor room was Gaby’s domain.

Whenever I was at home the various occupants of the house seemed to want to know me and I received lots of invitations.
The first to invite me were the two air stewardesses. They had heard that I spent my evenings, when not working, reading and listening to music on a transistor radio and promptly said that I could join them to watch shows on their large coloured television.

This didn’t happen much as they were flying all over the world most of the time. The novelty wore off after a while and the visits got fewer until they stopped altogether.

My friendship with the girl on the right was progressing well but it wasn’t the full-time occupation that developed later on and I was on talking, or nodding, terms with the other lodgers when time allowed.

I had always had the aspiration of becoming a writer and was secretly observing people’s behaviour and making notes that could one day be made into stories, so I was intrigued to hear that Gaby had been keeping a diary on which he had recorded how he’d met his boyfriend, who was a publisher.

He offered to read me some bits from it and I jumped at the chance. He was the perfect host and, after preparing some lemon tea in the kitchenette, he invited me to his room.

Sitting in an old but comfortable armchair, I started listening but not before he warned me

“You must realise that I wiil have to skip some passages that might be too intimate.”

“If Yvette had not left me so abruptly, I might not have met Oscar, the love of my life…”

“Not at all, he is very gentle and caring.”

He had not got the joke and I decided not to be flippant and to listen attentively as I wanted to know who Yvette was. That became clear as he continued reading.

“I had embarked on a relationship with a French girl I had met at evening classes but I felt no physical attraction for her and, accusing me of being frigid and not ‘a real man’, she packed her packs and went. I felt humiliated and wanting to drown my sorrows I went to a nearby pub whose friendly patrons made me feel welcome.

A young nice man listened to my misfortune and sympathised with me. It was the moment that changed my life.”

The diary’s entries continued in the same vein and over time I got to know a great deal about that part of his private life that he was willing to share.

We exchanged views on many topics, mainly about life in general, but also about personal tittle-tattle. He was the one who informed me that a beautiful girl, who worked behind the counter of a delicatessen and on whom I had set my eyes, was a member of the gay community.

It was a revelation that took me by surprise but Gaby was always full of unexpected news.
One day he told me that he was going to have a party with close friends.

He saw me smiling knowingly.

It’s not my name but he used to call me that because I was born in August.

He had planned everything to the last detail.

“To make it look kosher, for Mrs K.’s benefit., I shall invite some lesbian friends too.”

We knew that the landlady was not open-minded.
I was intrigued by such an arrangement and was curious to know the outcome. I was an outsider and therefore off-limits.

Knowing my inquisitiveness, he offered a way out. I was on an afternoon/evening rota at work and the earliest I could be home would be midnight.

“Feel free to knock at my door if the party is still going on”, he suggested, “and there’ll be a glass of fino waiting for you.”

It was in fact five minutes past midnight when I got home and could hear music from inside his room. I knocked lightly and he opened the door.

In a colourful dressing gown, a silk cravat, and a long cigarette holder in his right hand, he resembled Noel Coward.

As I entered the room he said “ Welcome, come in.” and handed me a glass of amontillado, then announced to the assembled crowd:

“Say hello to my friend Leo, he’s just called to see if we have enjoyed our party and to say goodnight.”

While sipping the sherry I noticed the absence of the sapphic contingent; he winked and told me they couldn’t come as they were busy washing their hair

I was about to leave when, in the semi-darkness, a voice piped up:

“Can I walk you home, darling?”
I could not swear by it but think I heard Gaby whispering: “ he’s not ‘one of us’.”

I have no doubt that he would have annotated all this in his diary but wonder if he mentioned the episode in his memoir.
I shall have to buy a copy of the book to find out.

A pleasant, easy read in your distinctive style, Luigi. I’ve worked alongside a few gays when I was in airlines; very camp and a real scream on nights out with us straight dudes. The female cabin crew were nothing like their poised and sleek on-board images when they’d had a few drinks either. 🙂

No More Waiting
by
ionicus