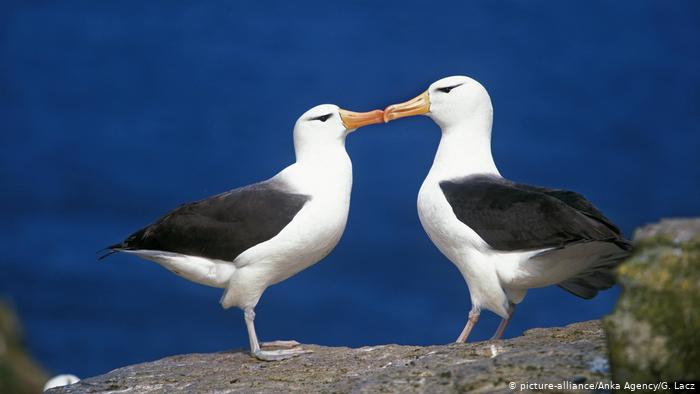 They can’t survive on plastic

Theirs is not to ask where they’ve been.

What they have seen? Were you faithful?

It’s just a matter of fact.

Waltzing with death under gathering cyclones

in the shadow of Antarctic Ice.

Oceans apart, a much hackneyed phrase,

means nothing to this dedicated pair.

There’s no boredom when survival’s the game.

No time for infidelity.

Meeting each year to dance their Tango.

The fluff becomes a Heath-Robinson glider

while their backs are turned.

With innate understanding they separate.

Not for them Peter Green’s soft-centred anthem.

A flowing tribute to these beautiful birds.

Just a few suggestions/edits for you to chew on:

Thanks B
Some good suggestions there. I will make some changes I especially like the word innate

I liked this piece, as a fellow Albatross fancier. I’ve recently read The Lonely South, by Andre Migot; in which he describes their strange nuptial dances – on Kerguelen island.

Thanks, Dougie
I do admire these wonderful birds, comical on land so graceful in flight. They are under a lot of pressure from plastic pollution now especially the ones that breed on Hawaiian islands.

It seems humanity is is making the same error as The Ancient Mariner.

LOVED it! I recommend a new documentary on Netflix. (Hardly ever go there it is so well…’nuff said)
Anyway, It is called ‘The Octopus, my teacher.’

The most beautiful documentary and this poem gives me the same feeling. Man has entered the sacred inner sanctum of the Albatross. That much maligned bird of great beauty.
An incredible poem .
Alison x

Hi Alison
Sorry to take so long to reply. I thought I had replied but I didn’t. Getting old I suppose.

You summed up my feelings about the way Albatrosses are treated perfectly. I hope thing can change before the disappear entirely. They are already in danger in some parts

I don’t use Netflix much but I did notice the octopus documentary. Haven’t looked yet but I did see a program on Discovery I think is about the same guy
Octopuses are amazing animals that’s for sure
X

I find this piece a lovable one. Good work.

Thank you very much S. These birds need a lot of love if they are to avoid extinction. I’m afraid for them

Enjoyed this poem. The couple are almost human-like in their ability to fly around the world and deal with all these issues and keep their relationship going.

Hi CW. Thanks for your insightful comment. If we are being pragmatic I suppose we say survival and conditions dictate animal behaviour, but it’s nice to humanise them. Pity they are under so much pressure from the very animals that admire their loyalty.