I’ve had the little book (B-33) for years; and just watched again 12 O’clock High. So this is a meld – some mine – some Frosts, from the book; and I give him due acknowledgement. 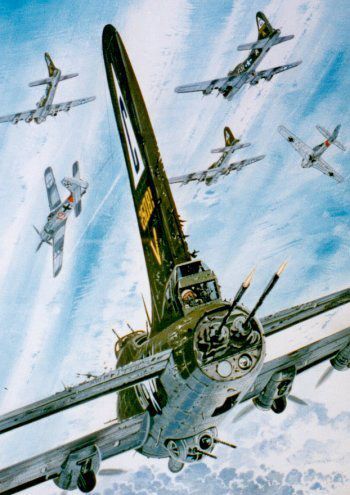 Robert Frost in a pocket.

flying high, over the channel;

bound for Holland and Germany.

Confined, all by himself, and with

Going out to check the pasture,

a farm boy away from Tennessee;

going out to fetch the little calf,

that’s leaning against its mother;

his past life –  that’s now cut in half.

Less than an hour now to the coast,

so, cock the levers fire off some rounds,

for now’s, the time to test his guns;

still, it leans against the mother.

so young – she licks it with her tongue.

The first blossoms come over Utrecht;

when soon the escorts peel away –

he goes to clean the pasture spring,

and turn the grass once after one;

mowing in the dew – before the sun.

Flying on, into the Reich skies

to torment, then staying to kill.

The dew has gone – his blade’s so keen,

his twin fifties cut into the scene.

A sleight of hand, ready to fight,

showing them how his weapons work.

A speck, now rearing into sight;

coming now – racing in, he pulls

the trigger and death comes out.

The ship next to his gets a hit,

so, pray for those trapped inside.

He remembers, with no reason,

At the Essen marshalling yards,

they drop their load that falls beneath;

the weight gone they can now rise free.

Banking for home, they could not see,

the cattle trucks – packed with refugees

Now on the home run the worst comes,

with the crew now tired and exhausted;

Such a maelstrom of explosions,

as bits of aircraft come falling;

past the line of his guns sights,

without a chute – holding his knees.

Sweat in his eyes, the cordite smell;

his arms aching, guns are his art;

designs of darkness to appal,

such things not meant to till the soil;

Fiery tongues of flame, explode through

thin metal walls, as a shard of

shrapnel cuts through into his chest.

He feels the wetness down his side;

The intercom comes crackling from the front,

he knows his role – he won’t be told;

his long scythe comes whispering down,

to lay the swale in nice, neat rows.

now he can rest back on his seat;

back where his life was in staying;

at an old house – renewed with paint;

inside it – a piano softly playing.

Below, he sees the coast recede;

the sun is warm, but he is chill;

a dressing has now staunched the bleed.

In his pocket, the little book he’d

tucked away; with time he may read.

Now, sixty year on, he recalls,

after reading most of the poems,

he’d swapped it for some tootsie rolls.

After that he guessed it just got lost,

This little book found me on a stall,

in a Norfolk village church hall.

though, being once in a pocket,

I can only hope he came through.

( with acknowledgment to Robert Frost) 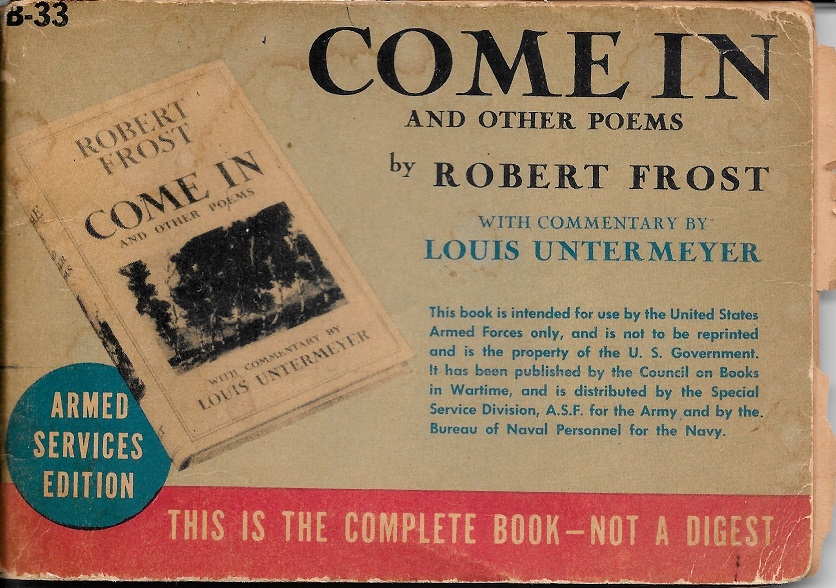 I enjoyed the poem – the weaving in and out could do with some polish – but we all have coping mechanisms to help us with the now, and to be “back where the life was in staying.” Looking forward to the next reading.

I find so much is conflicting; not only in myself, but ‘out there’; the poem in its limited way may reflect that; the heroism (if we may say such) contrasted with the waste of life. And is it (still) the rubric: ‘the only thing required for evil to prevail, is for the good to do nothing’. I missed conscription in Oz for Vietnam – my birthday was passed over (passover?) But a chap I worked with got the short straw, and it finished him. I thought that war futile, but would I have served against Hitler if alive at that… Read more »

Hi Dougie
, I am sticking to my thoughts on repeating “here in the rear turret” twice in the space of 5 lines…. I do think it spoils it a bit but congrats on the Nib
Alison x

A Nib, you say Alison!!! Blimey, not deserved; and I’m reworking it and (I hope) you’ll be pleased to know that ‘here in the rear turret’ twice has already been edited out; well that’s the first stanza done!

I have revised the work, taking on board some of the comments and suggestions (thanks All for these). I think it has improved, but maybe not to a final version.