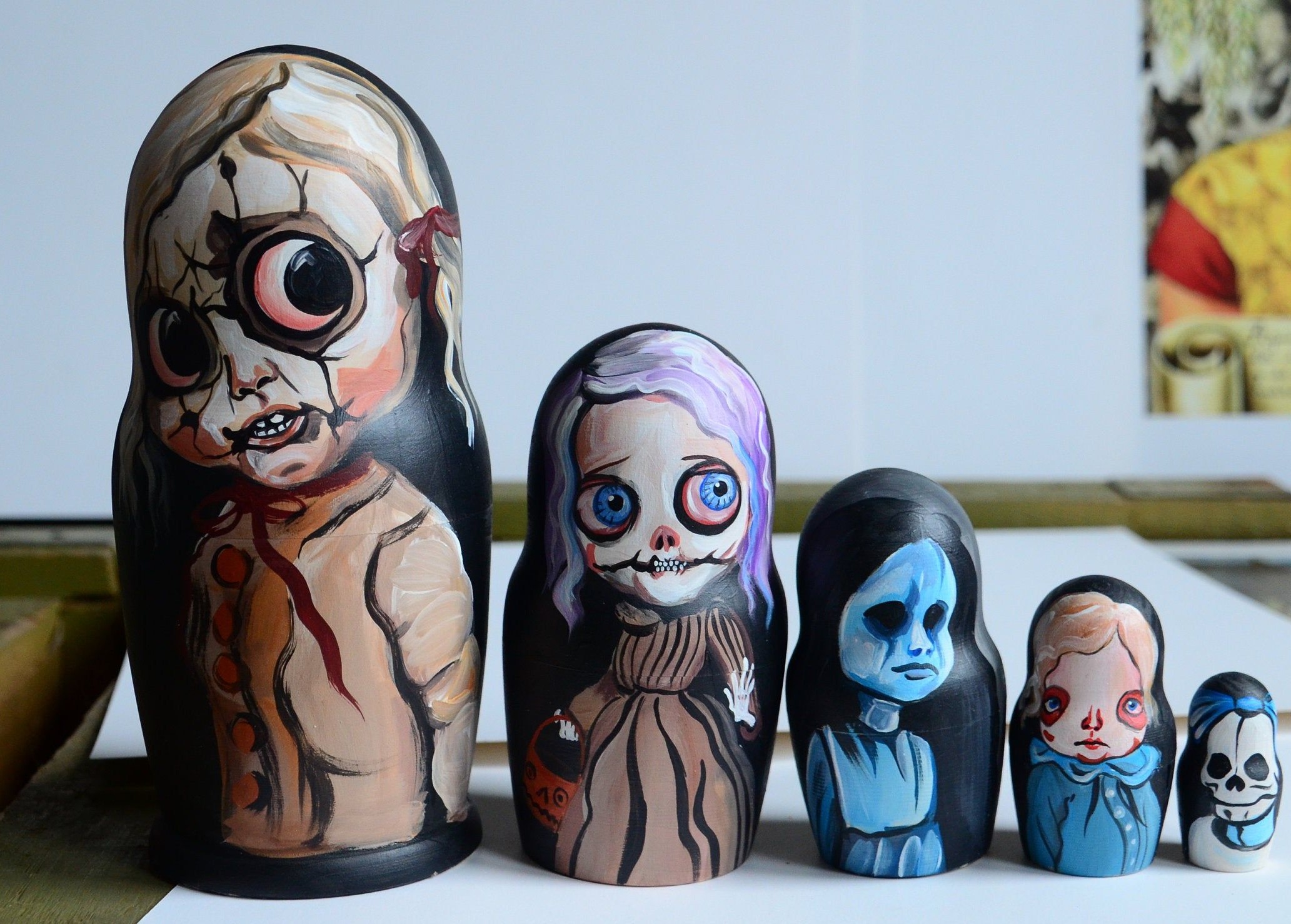 A Russia based horror  story

Lieutenant Grigori Tselikova was in no mood for bullshit after an eight hour drive from Kemerovo airport on bad roads in a worn out Volkswagen and a night getting bitten by dog fleas in a run down pension. Before Yakov Lisitskaia even opened his mouth Grigori sensed the area uchastkovyi was full of it and more than ready to dish it out.

‘So, what brings a Militisya detective to my quarter, Comrade?’ Lisitskaia asked as he poured himself a slug of vodka and prepared to fill a glass for his “guest.”

Grigori put his hand over the empty glass.

Unphased by Grigori’s aggression, the local cop leaned back and burst into spluttering phlegm choked laughter which terminated in a short coughing fit.

‘Not in these parts, Mr. Medvedev’s policeman. Time goes very slow round here.’ He slugged down the vodka. ‘We’re 4000 kilometres from Putin’s new Russia in one of the most isolated quarters in the federation. It’s just Wolves, Bears and trappers in these parts’

Lisitskaia’s expression became serious. He stretched right across his desk until his fat round unshaven face filled Grigori’s view.

Grigori slapped a photograph of a long haired young man on the desk. Lisitskaia ignored it.’

Like I said. What the fuck are you doing here?’

‘We know he came to this quarter. This is the last thing we know about his whereabouts.’

‘I don’t know any Andrei Slavina.’

‘You’re the uchastkovyi. He must have come to register his presence here.’

‘Not if he had something to hide.’

‘He didn’t. Look at the picture, Lisitskaia!’

Lisitskaia glanced at the photo.

‘Then you’ll go back to Moscow empty handed, Lieutenant.’

Grigori stood and stretched himself to his full 2.03metres. He grabbed his chair and dragged it around the other side of the desk and pushed into Lisitskaia’s chair. He sat on it and leaned his massive body hard into Lisitskaia’s shoulder..

Looking straight ahead Grigori said, ‘I think it’s time to let you know where I worked before I became a policeman.’

He reached into his jacket pocket and pulled out a gold and red embossed KGB badge and laid it on the desk.

‘Did Andrei Slavina register with you?’

‘Yeah, he came in here about three months ago.’

Grigori grasped the label of Lisitskaia’s uniform, forcing him to look into his eyes

‘I know that you dog’s turd. I want to know where he went after he signed in. You were supposed to ask him.’

‘He went where all the others went. What’s so special about this guy anyway?’

‘What d’you mean? All the others?’

‘People’ve been coming here and disappearing for years. Didn’t you hear the rumours, Mr. Ex-KGB?’

‘I was based in Georgia.’

‘Yeah, well. Some of your colleagues knew what was going on up there, I’m damn sure about that.’

Lisitskaia pointed vaguely to his left. ‘Ostrov-in-the-valley. It’s a settlement from medieval days. Nobody knows where the people came from, but there’s been stories about weird things going on up there for generations. It attracts all sorts of nosey bastards.’

‘What kind of weird things?’

‘I dunno. Black magic or something like that I suppose.’

‘You were the uchastkovyi. Why didn’t you look into it?’

‘You of all people should know that. When I started in this job thirty-five years ago I asked questions. I gave up on that when I reported the disappearance of a young couple. Your colleagues paid me a visit. After that all I did was try and talk those idiots out of going there. In the end I gave up on that too.’

‘Why didn’t you ever go and investigate?’

Lisitskaia picked up the Grigori’s KGB badge and ran its hard edge down the four inch scar on his cheek.

Grigori felt a little empathy for Lisitskaia. Once, he had cared.

‘What is in this, Ostrov-in-the-valley?’

‘I told you it’s a settlement. Houses I guess.’

‘Can you show me how to get there.’

Lisitskaia pushed his chair back and turned it to face Grigori.

‘So why do you want to go up there and look for this.’ He paused and picked up the photo.

‘This fucking whisker-less hippy? What’s so special about this guy that the Moscow Po-lice want to look for him when nobody gave a shit about dozens of others?’

‘Yeah. Dozens. At least twenty in the thirty-five years I’ve been here and sure as Bears fuck in the forest they weren’t the first.’

‘This case was brought to our attention because he’s from Moscow, that’s all.’

Grigori knew Lisitskaia had him. How could he tell him Andrei Slavina was the wayward, but naïve son of a Politburo minister – a close relation of Putin – who’d got into Occult and managed to give his secret service shadows the slip? Russia had changed in the last twenty years, but not that much.

‘I told you, he’s from Moscow. He’s been reported missing. I’m looking for him.’

Lisitskaia poured himself another vodka and slugged it straight down. ‘Okay, Mr. Moscow, it’s your funeral. I’ll show you the road. It’s a two hour drive, but don’t expect me to wait up for you tonight.’

. . . .Two hours on a road barely fit for donkeys brought Grigori to a wide clearing in a dark Pine forest. About a dozen scruffy wooden houses spread out in front of him, the windows in all of them shuttered. Around fifty metres up the road to the right was a larger building resembling a barn. A battered ex-Soviet army truck and cart – sans horse – sat along side it. There was no sign of humanity or animals. Grigori stopped the car across from the barn and stepped out. There was total silence, not even bird-song despite it being a fine summer day. He stretched to un-knot his muscles and looked around deciding what to do.

Finally, he crossed the road and pushed on the door of the barn. It opened silently. Inside there was a long table serving as a counter. It seemed to be a kind of general store. The shelves were pretty much empty and there was nobody inside. He was about walk out when he heard a rustle and a whimper come from behind a door on the other side of the table. Drawing his Morakov he slowly entered the room.

A gasp from the right made him swing around. In the corner, two men were holding a naked young woman on the floor. One appeared to be in the process of throttling her with a rope. The other was spread-eagled across her, trying to hold her still.

Gregori cocked the gun and aimed it at the men.

‘It’s not what you think,’ the guy laying over her shouted. ‘We have to do this for the village.’

Gregori charged over and kicked the guy on the girl hard on the side of his head. He flew off and lay unconscious against the wall. The other man stared at Gregori frantically tightening his grip on the girl’s neck.

‘Let go of the rope or I’ll blow your fucking brains out,’ Gregori screamed.

‘No. Never.’ The guy screamed back.

Gregori fired sending a 9mm bullet ripping through the strangler’s right bicep. He jerked backward and passed out. Just to make sure, Gregori kicked him in the face. He removed the rope and checked the girls pulse. She seemed barely alive.

Within a minute Gregori had the men handcuffed together and hog-tied with the rope they’d been using. He turned his attention to the girl. She was breathing slowly and shivering. He covered her naked body with his jacket and ran to his car to fetch the bottle of water Lisitskaia had given him for the journey.

When he returned he was surprised to find the girl standing naked in front of him. The two men, now conscious, screamed at him.

The girl approached Gregory and whispered, ‘Thank you, thank you,.’

She flung her arms around him. Embarrassed, he tried to push her away, but her grip became tighter. Her arms extended and coiled around his body several times gripping him so tight he couldn’t breath. He felt a thousand needles pierce his body simultaneously.

The last thing Gregori saw before his life drained away was the terrified faces of the two men he had condemned to death.

I cannot forget this story, excellent work but no to naked. you need suspense. just naked you either underestimate yourself or underestimate your readership, we the readers need at least half-naked over there. for many reasons we have to wonder, be undecisive. the naked part was too telling for me by ruining the suspense, something supernatural is going to happen, well okay but the writer was too confident he had me tricked, so I had two paths to choose until I saw naked occult perverts or X-files type of phenomena. ok then I said it’s naked ( which means it’s… Read more »

sorry for insisting! my god, tonight I am not good AT ALL at commenting, I cannot decide how to express myself. I will try again tomorrow please I am trying to find a way to say it. I believe half-naked is a safe way to gracefully let the reader keep his doubts for any type of conclusion. half naked leaves it open. could still be anything. every word counts and why later you made sure to use more suspense? The girl approached Gregory and whispered, ‘Thank you, thank you,.’ a half-dressed woman picking up her clothes would have been a… Read more »

Morning Nic. Thank you sooo much for your kind words. Although I admit I never gave a lot of thought about whether or not she should be naked, I do like it that way because it’s short and to the point.. However, you made me think about it and this morning I came up with a slight change which I think might cover both our choices. Tell my what you think about this small alteration. A gasp from the right made him swing around. In the corner two men were holding a young woman on the floor. One appeared to… Read more »

it is too dramatic now, and I think you need the image of her picking up her the top that was removed or the skirt and on approaching him with the Thank thank you bam the writer either confirms our suspicions but still surprises us with how he did it, or surprises us all the way.
I am sorry for insisting, I have been mildly obsessed lately with a couple of stories on the site and trying to reobsess myself with my own!

I will have a think. Not sure how it’s too dramatic though. I only took out the word naked and added the torn clothes. Maybe they shouldn’t be torn?

Remember Gregori gave her his coat to keep warm while he went to the car. When he returned she was naked.

women are more sensitive to cold, and the gentlemanly thing would be to give her his coat especially after what she seemingly went through. you can safely keep that part, but torn is too dramatic, too intense and I don’t think we need it after the violent scenes just before the writer surprises us anew with the final sudden violent scene of Gregori’s death, just when we think “okay it’s over now we can uncover our soul’s eyes and look again safely the worst has passed.” and another thing, why water, vodka. this is a cold territory and you think… Read more »