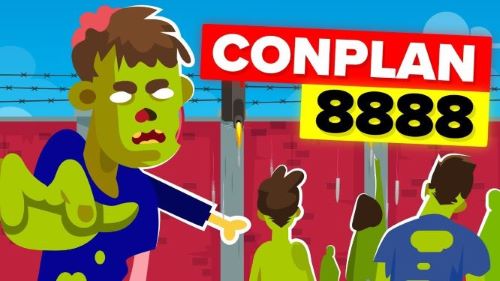 “Mr. Shy T. Wolf, have you got an update on homeland security?”

“Should we be afraid of being invaded by those pesky commies from Russia, China or North Korea?”

“Have they been sectioned, as I instructed?”

“Affirmative, Mr. President and sanctioned is the word you are looking for.”

“Any threats fermenting in the Middle Yeast?”

“No Sir, everything is flat as a pancake over there. The danger is nearer home: we have bats in the belfry and they create havoc with the smooth running of the country.”

“But that’s crazy. Is there anything we can do?”

“Yes, Mr. President. You don’t have to worry for much longer as we are in the process of having new contractors and hope to have a new and more efficient administration to clear up the mess.”

“So we are safe from further attacks?”

“Negative, Sir. There have been early warning signs that an outbreak of zombies is expected.”

“Yessir! They are creatures that come back from the dead; their infections can seriously undermine national securities and economic activities.”

“Goddammit, man, do you mean that men are rising from their graves and want to harm us?”

“Not only humans but animals too. Chicken zombies have actually been proved to exist: they are the ones that have been euthanised with Carbon dioxide and placed inside sealed chambers from which they claw their way out. They could have been responsible for the current epidemic.”

“Had they been chlorinated?”

“Strewth! So we are doomed?”

“Negative, Mr. President. We are always prepared for the defense of the country and the Pentagon has produced a plan – CONOP 8888 – that will be used to train our military personnel in how to deal with this enemy but it is highly secret so as not to panic the civilian population.”

“Good thinking man. I know that now I can sleep soundly without worrying.”

the pot calling the kettle black
the military and various state related zombies never find proof they are the real 0 patients of national zombism.

well that’s my take on this.

This is a satire, Nic, about the American’s obsession in finding enemies everywhere.
Cheers.

I think they are as gullible as the rest of us and Perl Harbor, 9/11, JFK assassination, Watergate, Depression, they have been through a lot needless to say like the rest of us.

Yes. It is true that people can easily be duped if they accept without questioning everything they are told, heard or read. Conspiracy theories are always suspect and should be handled with caution.

most of the time free thinking and investigation is labeled as such. one must handle with greater caution the official narrative. but that’s another story of the pot calling the kettle black. thanks for the short dialogue.

Very apt at the moment, I think. I couldn’t help thinking of the chlorinated chicken we’re trying not to have here when you mentioned the zombie chickens.

The very chicken I was thinking about, gee.

Ha! Very funny and well written. No more nonsense on being a boring old fart. Deal? 😉
I wondered where Shy got to. Homeland security eh? No wonder he’s too busy to post.

I see zombies every time I venture out to Sainsbury’s so I know they are a reality.
Alison x

I got the idea of mentioning Shy when I noticed the name of an official dealing with Homeland Security was actually Wolf. I too wondered about Shy and Sunken too. Does anyone know?
Good job I don’t shop at Sainsbury.
Thanks for reading and commenting, Alison.
Luigi x

I don’t have any idea where they are but I would love to see them back. xx

Thanks for the ‘pick’ Editors.

Luigi’s got his finger on the parody pulse, as usual! 🙂

With all the details kindly supplied by the U.S. administration it was easy to concoct a satire, Steve. It more or less wrote itself.