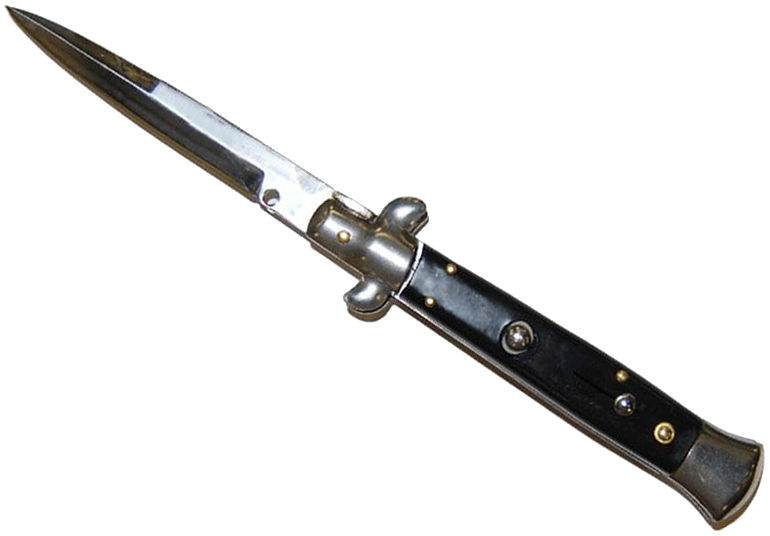 (Thanks to Jim, Nicoletta and Bhi))

Noodles has been with me for about ten years now. I remember the day we met like it was yesterday. I was having dinner with my wife at Uncle Marco’s place. Interesting feller is Uncle Marco; a businessman, but nobody in our family knows what kind of business he’s in. One year it’s insurance, next he’s running a café. Then he’s a football trainer or he’s selling furniture. Whatever he does, he seems to do alright.

When Aunty Sophia plonked a couple of bottles of Barolo on the table, Marco took something out his pocket and squeezed it. A four inch blade appeared like magic and he sliced off the cork covers. He must have seen my expression. I’d never been that close to something so illegal before.

‘You like it?’ he said, rotating the lethal weapon between thumb and forefinger.

‘I’ve never seen a switch-blade before,’ I said.

He folded the blade. It slipped into place with a solid double-click. Stretching across the table, he dropped the loaded handle next to my cutlery.

He reached down and pulled a bronze coloured Colt automatic out of his belt and held it up.

We both leaned back in our chairs and laughed at the joke.

‘I’m building up my business. Sometimes I need to protect myself. . . .You want the knife?

Uncle Marco looked at me real serious. ‘It’s good for opening letters and bottles of wine, but if you point it at someone . . . be prepared to use it.’

That’s how I got it. I named it after I saw the young “Noodles” use one like it to kill Bugsy in the shadow of the Manhattan Bridge. My Noodles wasn’t much use for anything other than a letter opener. It was as dull the plastic scissors my kids used for cutting paper.

I’ve been working on Noodles lately. My grandfather was a barber, he showed me how to strop razors when I was a kid. Now it’s so sharp I could shave a peach.

Tomorrow night I’m going looking for the guy who did those things to my daughter. I’ll introduce him to Noodles and the first time in ten years, I’ll use it for more than opening envelopes.

Hi Guaj,
I found this to be not only absorbing, but atmospheric, too. The second paragraph is a little clunky. Maybe it would be better with ‘while she prepared the food’ omitted. Also ‘He must have seen my eyes nearly pop out’ might be better without ‘nearly’ and ‘out’. Just a thought…
Cheers,
Jim

Thanks, Jim
I guess I could give it a little trim.

a short effective story, I didn’t like one thing, the sentence It changes a lot. I think this sentence weakens the story.

You might be right Nicoletta. I’ll take a look at that.

Hooked from the start, and the structure and pacing is excellent.

Just a couple of observations:

get rid of the full stop between yes and I’d.

And Peach – does that need capitalisation?

Right on all counts. Changes made. Thanks BH.
I’m a bit busy cleaning at the moment, I’ll try to read your second part later. (looks interesting after a quick ‘squint’)

This is again, well written but it needs filling out. The end is unexpected and too bizarre. To get to that end, you need to tell us that the boy grew up, got married, had a daughter and what happened to her. And all that time, Noodles got sharper and pointier.

Hello, Whale. Thanks for the compliment, but I just spent ages trying to cut it back. I agree this could be made into a much longer story, giving more details of Uncle Marco’s business ventures, more detailed descriptions of the dinner and conversations. More background to the damage done to the daughter and even thoughts about the film, ‘One Upon a Time in America’ but then I’d have almost a novelette and that wasn’t what I was aiming for. It would certainly be too long to post on this website. However, maybe you have given me an idea for something… Read more »