The Box Left Behind & Jack-In-The-Box 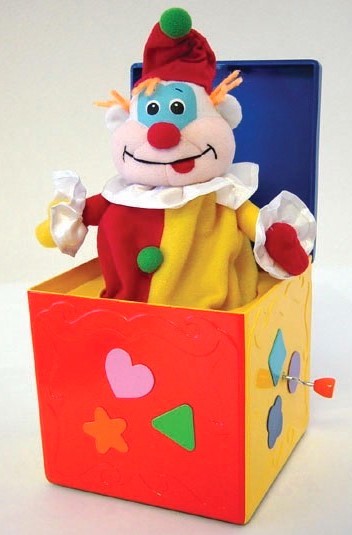 It isn’t very often that one finds a genial house vendor who not only shows you round the property but also treats you to an afternoon tea on the back garden’s lawn.
Colonel Harveybutnot comported himself in an impeccable manner and proved to be the perfect host.

It was with much regret that he was selling the dwelling which had been his home for a long time but he was emigrating to South America where he was embarking on a Diplomatic career.

We were told that he had packed all his belonging which had been shipped and that he didn’t have any use for things left behind and we would be welcome to them if we so wished.

It wasn’t until the following week that we found a taped box that must have been intended to be dispatched with the other shipment.

No one, not even the estate agent, knew the Colonel’s forwarding address and we were unable to find the diplomatic mission to which he had been assigned.
Either it was a secret assignation or he had led us up the garden path. So we were stuck with the forgotten package.

Protocol said that we should have surrendered the box to someone in authority but to whom and for what purpose? We didn’t know what was in it.

It was decided we should slice the tape with a knife and examine the contents hoping it wouldn’t prove to be a Pandora box.

What we found instead was a cornucopia of written material in notebooks that resembled diaries but on further inspection seemed to be the manuscripts of a crime novel with realistic details of murders and various other villainies.

This delighted those among us who were bookworms or, like me, would-be writers.

The purple prose was so good that I even contemplated plagiarism to write a blockbuster based on the plot of that novel.

It was only as we delved deeper into the narrative that we started to doubt the assumption that this was a work of literature.  Dates, sometimes ten years old, and names mentioned had a resonance that led us to believe that what we were reading was a true chronicle of events.

I was sceptical about this interpretation but Mother, who thought of herself as a Miss Marple, deliberated that an investigation should take place.

By researching old newspapers and microfilms in the library she ascertained that the names we had come across in our readings coincided with persons who had disappeared with no trace in the years recorded in the manuscripts.  Obviously all that was circumstantial evidence which didn’t amount to a proof of guilt of the absent Colonel, who could have been a callous criminal or an imaginative author.

The wise course of action was to present her findings to the department of police dealing with unsolved cases.

And that’s where all the files, including the cardboard box, went.

We haven’t heard anything yet but we all know that the wheels of justice turn slowly. Perhaps one day we may learn the truth.

Contrary to popular belief, ‘Colonel’ Jason Harveybutnot had not emigrated to South America but had travelled a shorter distance to a minor consulate in the Capital where he had sought sanctuary.

He knew that the evidence he had left behind would raise suspicions and he needed breathing space to evaluate the consequences of his disastrous lapse.

It wasn’t really his fault that the box had been forgotten; all the packing had been done by the removal company and he should have checked or done the job himself.
What was the point of paying good money for a second-rate service?

The police had acted remarkably quickly in tracing the whereabouts of the suspected criminal.

“We have found out where he’s hiding”, said Superintended George Jejune smugly, “We got him boxed in. He has no alternative but to surrender and face justice”

His optimism was not shared by Inspector Isabel Prettymuch. Their quarry had proved to be a slippery customer many times before.

The self-styled Colonel was thought to be a leading general in the underworld and had been arrested and interviewed in connection to the disappearance of other mobsters but no one had discovered where the bodies were buried so no crime could be pinned on him.

Presented with an arrest warrant, the consul was quite glad to get rid of an unwanted guest – who was eating him out of house and home – and released him into the arms of the law.

Now in detention, Jason had time to reflect on his situation. Prior to his arrest he had planned for every contingency and had shredded every bits of paper that had his writing on them; letters, receipts and even the passport that bore his signature.

His tactic was to stonewall the investigation by claiming that the box in question had been planted during the removal to frame him and that the manuscripts inside the container had been written by someone else.

The writing seemed to be on the wall, so to speak, as a forensic analysis of his handwriting could not be made and he could not be deemed to be the author of the disputed text.

It was a problem that prevented a resolution of the case as far as the prosecution was concerned.
Neither the police nor the accused reckoned on our Mother’s resourcefulness and common sense.

This would-be sleuth in the manner of Agatha Christie’s Miss Marple had come up with a true jack-in-the-box and surprised us all.

She called on Superintendent Jejune and presented him with the contract that had been exchanged when we purchased the house.

At the bottom, in bold letters, was the signature of Jason Harveywhatnot.

The culpability of that individual still referred to as the Colonel could now be proved.

Hello, Luigi.
I read through this charming little story, it’s well written. The rather tongue-in-cheek classical middle class phraseology you used lends itself well to the light hearted nature of the piece. In a way it reminds me of the gentle middle class crime programmes the BBC were so good at making such as, Shakespeare and Hathaway or Father Brown.

Hi Guaj. Firstly let me thank you for the comment. I am rather surprised that this piece was at one time ‘trending’ at the top as no one, before you, had put forward any critique and the number of hits was relatively low. No matter, that elevated position may encourage more readings. Having received a bemused response from a reader when I posted the first part as a single story I decided to combine the two.
I deliberately used a gentle tone à la Agatha Christie with her sleuth Miss Marple.

Mr Pagano, an interesting re-telling of a box tale; the styling was spot on. Mothers do tend to be extremely resourceful, but with the increasing use of docusign and electronic signatures I wonder whether there would have been another ending.

Thanks Bhi for reading and commenting. You make a valid point regarding electronics signatures and I checked the current position of the law. The Law Commission’s website cites uncertainty in the law: ” while the Electronic Communications Act 2000, a UK statute, mirrors the admissibility provision in eIDAS (a EU-wide regulation), it does not expressly provide for the validity of electronic signatures.”
The Commission proposes “that electronic signatures could be witnessed via a webcam or video link.” The identity of the signatories would be even more visible with this method.
Best wishes, Luigi.

Oh, I like this. I love the way you tell the story. There’s a particular tone to it that makes me think of Miss Marple or Hercule Poirot. The names are wonderful and there are some lines in it that really make me smile. Very nicely done.

Nice hearing from you, Gillian. You can see that thanks to your efforts the site is being crowded once more with an enthusiastic response. I contributed this in answer to a request for more prose and, though I usually write poetry, I obliged. I am glad that it resonates with you. The tone is, as you say, reminiscent of Agatha Christie’s genre and it was a deliberate choice. It is intended to be a light and humorous fiction but I introduced a tiny reference to an actual event, which may be so small that readers won’t even spot it. Many… Read more »

The Box Left Behind & Jack-In-The-Box
by
ionicus