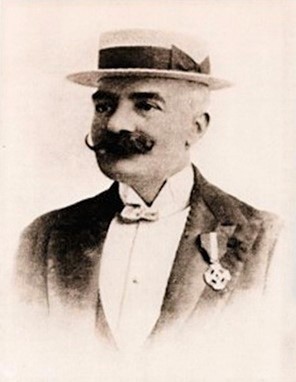 It didn’t come as a surprise to me to read that a writer had confessed not to have visited the exotic locations he described so vividly in his books, adding that the only passport he needed was a library ticket.

He is not unique and he wasn’t the first armchair traveller, either.

That distinction belongs to an Italian author unknown in this country, as far as I know, whose work has been translated in various languages, including French, Spanish and Portuguese.

My introduction to literature began in childhood and, unlike my contemporaries who were hooked on comics, my reading consisted of a diet of adventure books full of swashbuckling heroes who sailed the high seas and journeyed to faraway lands.

The tales of the Black Corsair and his escapades to the island of Tortuga and the exploits of Sandokan, the Tiger of Malaysia, fired my imagination and steered me towards the Atlas in search of the foreign countries mentioned in the novels by a certain Emilio Salgari.

I hung on his every word and believed him to be a great explorer whose travels had been the inspiration for his narrative.

Years later I read biographical notes on this writer and it was only then that I discovered that I had been cruelly deceived: the man had not set foot outside Italy, ever.

But instead of outrage I felt admiration; he had been able to transform his fantasies into gripping stories and that meant talent.

I learnt that Emilio Salgari was born in Verona in 1862 and his dream was to join the Navy to satisfy his hunger for exploration.
Unfortunately he either failed or did not take the final exams and was not able to fulfill his ambition.

The only sailing that he managed was a short cruise on the Adriatic Sea.

This did not preclude him to call himself “Il Capitano”, a title he used throughout his life.

Unable to pursue the career he had set his heart upon, he turned to journalism and writing.

With brazen audacity – echoes of Evelyn Waugh’s Scoop – he submitted to “La Nuova Arena”, the paper for which he worked, special reports purported to come from Africa.

The sources for these were facts that he had gathered from foreign newspapers, press agencies and talking to missionaries and explorers.

In addition to articles he managed to write in excess of 200 adventure stories and books which proved to be very popular.

His reputation was further enhanced when, in 1897, he was made a Knight of the Crown by King Umberto of Italy.

But his financial acumen did not match his literary skills. Although he achieved fame, he never quite enjoyed the fortune that his considerable talents deserved.

Despite changing publishers several times, he did not profit from the success of his writing.

But the lack of financial stability was not his only problem.

In 1892 he had married the actress Ida Peruzzi, with whom he had four children.

During the course of their married life, his wife had gone insane and had been sent to an institution where she eventually died.

The strain of caring for her and the children, coupled with increasing debts, drove him to despair and suicide. In 1911 he committed hara-kiri in the manner of a Samurai, reminiscent of characters he had portrayed in his tales.

As a parting shot he left behind a letter full of contempt for his publishers in which he asked them to bear the expenses of his burial.

The interest in Salgari’s work was so phenomenal that, even after his death, books with his name kept appearing.

These posthumous novels, 59 in all, were proved to have been written by one of his friends, the writer Luigi Motta and by Emilio Salgari’s son Omar. They have been labelled Falsi. fakes, but such was the fascination with the genre that the demand for them was undiminished.

The popularity of this writer is not confined to the publishing world; in 1963 MGM made a film based on Salgari’s most celebrated character, Sandokan.

And the fact that twenty-six of his titles can be found in the U.S. Library of Congress must surely be the ultimate accolade.

What a fascinating account! This reminds me of my favourite traveller Ibn Battuta, who in medieval times spent most of his life travelling across North Africa, Asia and India. The history of his Rihla – his travel journal – is very similar to Salgari’s, but that does not detract from the man and his writing.

Thanks for looking in, Bhi.
﻿Well, at least Ibn Battuta – unlike Salgari – travelled extensively.

Fascinating reading, I used to read stories of exotic spice filled lands, of temples and pyramids and the wonderful colours of the Caribbean.
I went on a school cruise at 13 to Egypt, Tel Aviv Gibraltar etc, but had so many illusions shattered when I came across a Woolworths and Marks & Spencer’s. That seemed so wrong somehow.
So I prefer to visit as you say by armchair now. Sue.

I too, way back in 1966, found a Woolworths in Mexico City where I bought an onyx ashtray but id did not put me off from a fantastic visit to that country.
Cheers, Luigi x