So that contrariwise ye ought rather to forgive him, and comfort
him, lest perhaps such a one should be swallowed up with overmuch
sorrow. 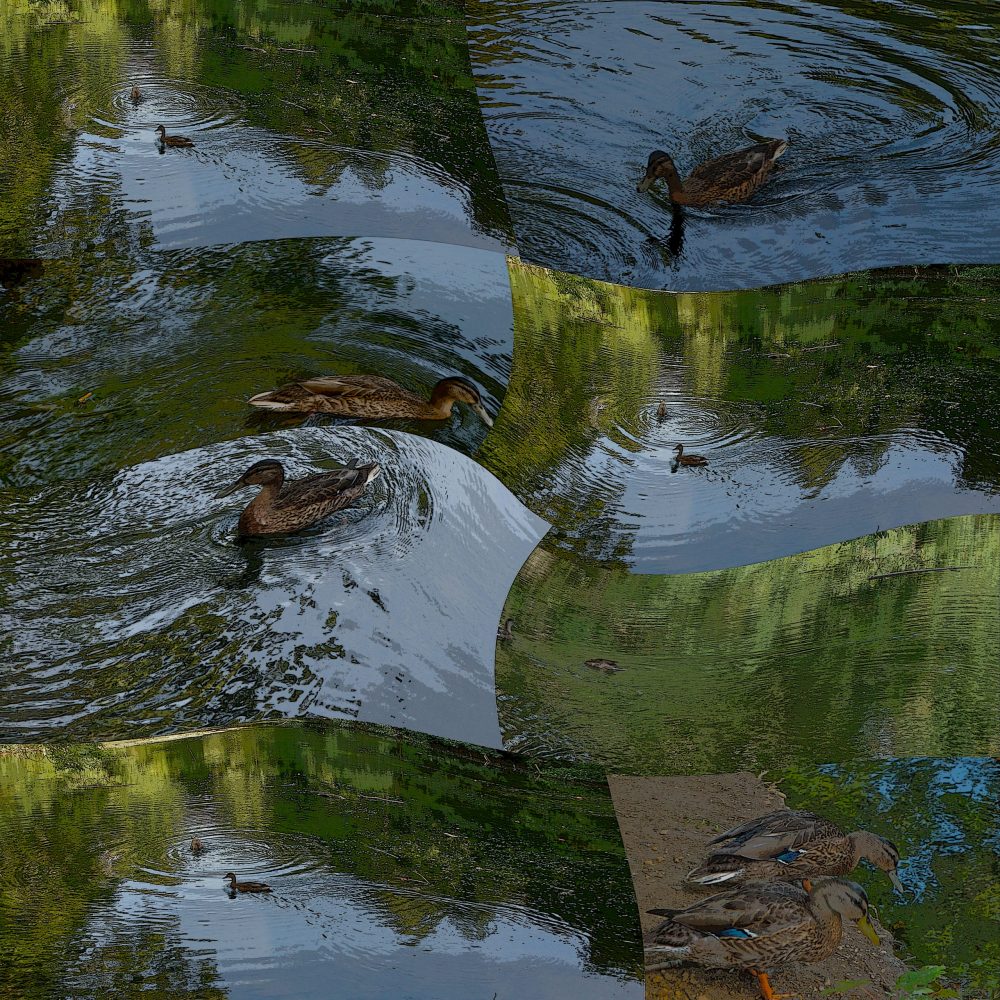 Speaking to Ata’halne was like throwing stones into a boggy old waterhole. Without resonance the stale water swallowed them. Each time her words to him hung a little longer in the air, as if waiting for an answer, even a short one. Then, when none came, they drooped, fell and got lost.
It was different when she spoke to Aditsan. The stones, she threw to him, caused cascading droplets in a lake of laughter easing out in happy circles around her words.
She had studied water in her biology lessons and knew that, when frozen, it comprised connecting crystals in different shapes and clusters. Experts pinpointed the source and origin of water by looking at their forms.
When comparing Ata’halne’s stale waterhole to Aditsan’s lively lake, she wondered whether her words changed the water. Or was the water changing her words?
Perhaps the difference had to do with the stones she threw? They were, maybe, too big for the waterhole or thrown with too much force, so to stir up mud and unbalance its shallow water? She could use pebbles instead, rounded and shiny words that just skipped the surface.
She loved spontaneity, throwing words with no afterthought into a large pool and watch them spinning and flipping like acrobats.

In her valley rain was scarce. Storm clouds were forming all the time, but soon dispersed into a dull sky. No hope either that the monsoon winds would bring the much-needed rain, held back by an imposing mountain range that surrounded her life. Over the years she had found a few steep paths beyond their intimidation and reached the sunny lake of Aditsan, where she playfully threw her words in and watched them fly with ease as glittering flying fish. For once she breathed easier and enjoyed the sun. Her skin lost its pallor; her hair gained elasticity, and she felt invigorated.
It was then when she begged Aditsan never to stop speaking to her, as she loved the echo of her words in his teasing voice. What they said to each other played out like a ping pong game, stroke upon stroke, words in and out of control, yet in the frame of laughter.
When she thought of the waterhole, there was no urge any longer to throw stones; instead she held her words back. The best way to deal with long silences, she decided, was to get as far away from reality as possible, to a bookshop, for example, where you can hide in dark corners and emerge into the very essence of books. There, words become alive with no need for throwing them. All those unspoken words.

As by accident, she came across Emoto’s research. He had called water a “blueprint for reality” and announced to the world that emotional “energies” and “vibrations” could change the physical structure of it. His crystal experiments comprised exposing water in glasses to different words, pictures, or music and then, by freezing and taking microscopic photos of the resulting crystals, he found that water exposed to positive speech and thoughts resulted in beautiful formed crystals. Any negativity in thought though would yield ugly asymmetrical crystal formations. She marvelled about how consciousness could influence the structure of water.
Did this mean water could respond to people?  During an earthquake, she read, crystals had reflected the panic and also the later recovery. Tap water showed formless crystals until it changed when a group of people sent intense loving thoughts into it.
The words she threw like stones might impact on the crystals in the waterhole? Would love do the trick, words spoken with tenderness, a stone thrown in an impulse to forgive and forget?
She studied Emoto’s book of crystals and their perfect shapes surprised her; all tiny snowflakes in the image of the Flower of Life in sacred perfection.  She now saw water as a mirror to the mind.
Most of our body was water, anyway. There was a hidden energy field to help with communication. Words spoken, or imaginary stones thrown, might achieve much more than a flip or a plunge, but influence the substance into which they fell?
Speaking to Ata’halne was like throwing stones into a boggy waterhole. Might singing change it into a crystal-clear pool?
The thought of the Aditsan’s sunny lake left her nostalgic.  With him, words had come easy. There was no need for songs either. In particular for someone like her, who could not hold a tune.

Years went by. Everyone was talking about global warming, a theme that left her cold. For her the big freeze had set in long ago.
The boggy water hole lay frozen over and the thrown stones, or words, had disappeared, untouched and unheard. Ata’halne had lost his sense of hearing.
Whatever she said to him she had to repeat or write on paper. It tested her patience, for he refused any mechanical or digital hearing aid. Overall, he ignored all technical things, even phones.
As Aditsan had moved away and taken the sunny lake scene with him, her life became lonelier. The mountains around seemed to close up on her, and most of her days she tried escaping their shadows. During time by Ata’halne’s frozen waterhole, she coloured the past through the prism of her sadness.  From time to time chatty gulls settled to preen their feathers. Fresh easterly winds ruffled the sky and opened patches of blue. A blue that increased in intensity, turning from a pastel colour into a deep azure.  Off and on the sun broke through the mountain rifts, leaving a pattern of scattered eternity rings on the ice.
When the wind blew in the right direction, the old woman’s songs in her high-pitched croak spoke of her memories, the old words to Aditsan living on and the words to Ata’halne having died. There was more:  her actual words, and then what she had liked to say to Ata’halne after a time of reflection. By scanning her memory, she used her imagination. Made-up sentences, where she gave herself the best lines, resonant lines, to open his heart to her, despite his habitual solitude. With her craving for communication and nearness, but unable to reach, she still hovered in an emotional limbo without a conclusion.

One day her daughter called, who had left years ago to make a better life for herself, away from the valley of shadows, the enclosure of mountains and the barren land.
She told her mother: “Ashante, your granddaughter is coming to see you.”
An independent and self-assured girl, Ashante, undeterred by the long journey, looked forward to meet and get to know her grandparents. A letter informed Ata’halne of her arrival. Deep in thought he inhaled the smoke of his carved eagle pipe, hesitated for a moment, then quoted: “We do not inherit the earth from our ancestors, we borrow it from our children,”
When he first saw Ashante, there was no need for words. He took her into his arms and just held her.
The girl presented a gift to him in a silver box engraved with his initials. He became agitated when he saw a modern hearing aid and wavered between acceptance and rejection. But his politeness gave way, and he thanked Ashante for “this most unusual gift”.
With her help he learned how to use it and to his amazement long forgotten sounds came back into his life. It was like finding his way home with a powerful torch.
The old woman, still sitting by the waterhole, detected a thaw. Ducks and geese arriving in pairs were splashing and diving. Even two swans made it their home, swimming in majestic circles and boosting its ornamental value. These vivid birds circling among the reeds seemed to be there for her alone. A charming picture, its significance only for her to guess. Were they all phantoms, just parts in a larger story? Unsure of living in a reality or other dimensional layers, she more and more floated into a strange dreamlike existence.

By now she had stopped throwing stones into the water as for not disturbing her winged friends. Instead she threw them chunks of old bread. She also kept on singing, as the ducks seemed to enjoy the rhythm and melody of her songs, not minding the odd wrong note. She spent hours with them, never getting tired. They flapped through the air and plopped on the water with their flat orange feet slipping and sliding all over the ice. She viewed them clowning around, a few on their bottoms, which made her laugh. When around the ducks a happy warm sensation crept over her, and this momentaneous happiness hit her as something she had not experienced for a while. She talked to the ducks and also to the geese, but when the geese lifted off, they left for another story that had nothing to do with hers.
To converse with animals was easier than with people who hide so much of themselves. They lie submerged, ice floats, their visible sides projecting cool and white, their dark and inner thoughts kept hidden in the depth of their mind.
Content in the company of the birds she looked up to the sky-blue space above and, for the first time, the magic of the mountains overwhelmed her, spiky tops dipped in the orange glow of sunset. It made her think about the transience of life, the flash of a firefly in the night, the little shadow which runs across the grass and loses itself in the sunset. While the last light fell over the waterhole she sat cooling her face in the wind and pitied Ata’halne for his dullness, his lack of appetite for life. He showed no interest observing the ducks with her, had let her words drown and buried his own words.  Whatever she was doing seemed of no importance to him, she thought.
At this instant she heard a noise. Ashante was walking next to her grandfather towards the waterhole. When they came into view, holding hands, they were laughing and waving their arms to her.
And hearing Ata’halne calling her by her name, she answered.

this story might be a bit too philosophical for some, but I hope its universal message becomes clear

It is a beautifully written story, like poetry. There’s an universalness to this story as if it has happened many times, the story of many women. I can see each character so clearly, each with their own viewpoint and so sure of the rightness of that perspective.
I am happy to have found your writings. I look forward to reading your older posts in time.

thank you so much ,Shoam, I am so happy with your comments! I really thought nobody would understand my writing. I wrote this story sometime ago but revised it , to make it less obscure. The Emoto water research is so very interesting (and true) have you come across him? He sadly died (as we all will do of course) but I wished he could have lived longer to share more of his experiments. If you like my poetry (I write very little prose), my book published by CerasusPoetry in London is available on Amazon, its title Outbranching…got some nice… Read more »

Words like Stones and no need for Songs
by
Yutka

Hi, I have been a member of UKA for more than 10 years, had some time where I was silent and all of my poems had disappeared.....but now I am back. Hopefully.....
more >>