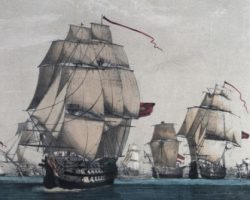 The publican of the ‘Herod’s Head’ smiled as Nazim entered the tavern.

An evening of fun and games was about to begin; he was certain.

“Hello my lad”, he said, “seen any other celestial bodies from outer space?”

This young man was very fond of telling tall tales so far fetched that no one took him seriously and he had been the butt of many jokes lately for that reason.

His news that a ginormous star was heading towards Bethlehem had been pooh-poohed even though the sky at night had been unusually brighter.

Prior to that he had been saying to have overheard an angel telling a local woman of a virgin birth.

“No sir”, the youth replied, “but I saw three ships come sailing in, this morning.”

“You saw three ships, you say? Either your brain is addled by an over-consumption of arak or you have a keen eyesight, my dear fellow. The nearest stretch of water to us is the Dead Sea and that is nearly sixty-seven thousand cubits away. But any fool knows that no boats can navigate on it.”

“I say, steady on landlord. You make me sound like a drunkard”.

If he thought that this timid appeal sounded dignified, poor Nazim was to be disappointed; all the regulars burst into raucous laughter and started mocking him. They all knew of his fondness for that particular booze and of his vivid imagination.

“Get back to reality, you buffoon.”

It wasn’t the first time that the poor chap had been humiliated by this uncultured mob.

He knew that he had a sixth sense and could foresee events but no one believed him and he realised that no one is a prophet in their own land.

He thought about how he had been vilified about the star.

Now that the phenomenon had been acknowledged he was entitled to have the last laugh but decided to keep his own counsel and clam up.

He resolved not to tell the assembled crowd that soon a poor couple would ask the inn keeper for a room for the night and, after being refused by that mean man, would shelter in a stable where a birth would occur.

That that occasion would attract visitors from all over the world with lots of shekels which would reinvigorate the economy.

Better to keep them in suspense rather than risk ridicule.

Ha-ha! I like your slant on this one, Luigi, and it all works very nicely in 400 words.
Have a good Christmas,
Steve

Steve, you have just saved this piece from extinction. I was about to delete it as it hadn’t been commented upon despite 160 hits. This is my usual procedure if no feedback is likely to be forthcoming. I said this to Trevor when he raised a similar point in relation to one of his stories which he felt had been neglected.
Without readers’ response we will never know if our work is up to the mark, so thanks very much for letting me have your views.
Happy Christmas,
Luigi

I, too, loved your slant on this Luigi. An enchanting read.

Many thanks.
Cheers, Luigi