The following poem has purposely no specific form.
It is not an easy or comfortable read.
It is what it is. 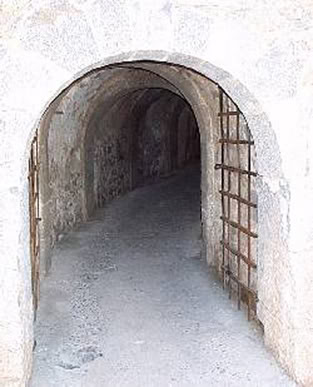 Not too far really
but might as well be a million miles away.
There is no way back
for child, adult, doctor or lawyer.

Provision brought over to sustain life
and left at fortress door.
No chains or bars, but no escape
the only life – is a new one.

Marriage is allowed – but any child
is removed immediately, never to be
seen again, agony on agony –
in this endless pain, both physical and mental.

Dante’s gate is the point of entry, with no return
for these pitiful creatures, and is aptly named.
As they are directed through the dark tunnel,
all hope is truly abandoned.

The invincible German army, hell bent
on world domination, stopped three hundred
yards short of hell. This was their bridge too far.
No occupation here – their courage at last failed them.

What is the crime that warrants such
inhuman treatment? No crime at all,
just the misfortune to have the awful tag of
Leper attached to you.

This island place which housed those wretched souls,
living in these isolated conditions until the late fifties,
holds lepers no longer.
But its name will live forever –
The island of Spinalonga.

Good reading, if a little bleak. I’ve been to Spinalonga, it was back in the 80’s. It was unsettling to walk the street and look across at Elounda on the mainland, only a short distance, but no way back. Lots of books have been written about the place. Thanks for the memory of my time on Crete.
Mike

Yes indeed Mike, it’s hard to think that this was so recent, People tend to think of leprosy as a biblical problem – it still exists today. Thank you for your knowledgeable comment.
gerry.

As you say it is what it is, I hesitate to say I enjoyed this, but I did, a very strong and disturbing read but made me want to know more, and I shall certainly find out about the island of Spinalonga. Sue.

No problem with you enjoying this poem Sue. The place is just for tourists now.
As Dave said above there are a number of books about Spinalonga – the best one in my opinion is Victoria Hislop’s book – ‘The Island’. a fascinating read…
Gerry x.

Goth, It was first posted on UKA in October 2006. I usually put some reference,
but missed this one. I will look into that PM business and get back to you. It was in answer to your earlier question about Deans which I have recently discovered,. It must have been hiding 😉
Thanks for comment
Gerry.

Goth just sent you a PM please let me know if you receive it. 😉
gerry.

Yes I heard about that. This life is hell on earth. One man’s freedom is another man’s slavery. Just the way it is Gearoid…..

Thanks for your comment Gezz (Hell on earth indeed)…

Dante’s Gate. (none fiction)
by
gerry