This is an almost true story, at least eighty five percent factual! 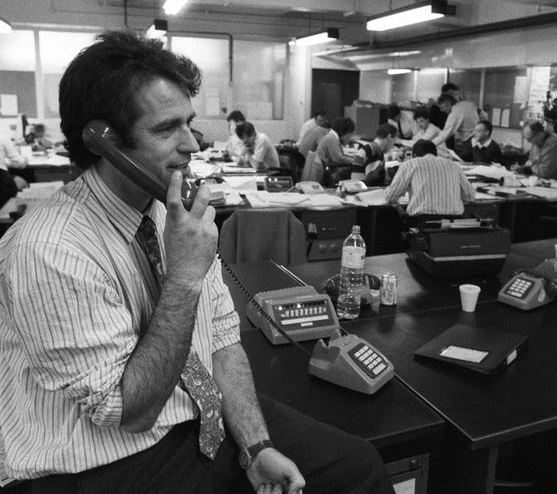 1980, and I was living in Ealing, West London; commuting to Hammersmith,  and working for a Dutch company. My job was in stock control, based in the accounts department, with my colleagues mostly accountants, one of whom, I’ll call him Grahame, had a desk near mine, separated by a spare desk that never seemed to be much used, apart from the odd temp.

I soon found a kindred spirit in Grahame; we both spent hours talking to each other as Pete and Dud – me Pete – he Dud; though we did eschew Derek and Clive, out of consideration for our colleagues sensibilities and to avoid being sacked. And to add variety we worked on other voices – mine being a passable Prince Charles, which I used when calling the service department – reducing their secretary to hysterics.

What did save us from censure was a combination: of being reasonably competent in our work, and that our boss was Mr. Patel, an affable gent, who was not familiar with English satire: he was more nonplussed when we didn’t speak in funny voices; and the rest of the department treated us as the idiots that we most certainly were. And all the time, the other desk stood unoccupied between us.

What changed was the phone on that desk ringing, quite a few times each day; usually by someone trying the wrong extension, or after the wrong person. One day it seemed to be ringing more often than usual; as I picked up the extension, some mischievous urge came over me, because I answered: “Ralph Monkton’s phone”. This nonplussed the caller; and after that we were on a roll, always answering this way.

That would have been enough for some light levity, but we were idiots, so we began to cultivate the persona of ‘Ralph’, and to do so by subtle increments; as an example, when in the lift with others discussing Ralph – sometimes in a positive way, sometimes critically. Over time we upped the game, signing cards as Ralph Monkton; even – and this was a master stroke – sending memos from his desk.

After two months we felt that Ralph Monkton had achieved corporeal reality, at least in the minds of others, and to some extent manifesting through internal communication. The pinnacle of our endeavours, which we aimed for, was to have Ralph on the payroll; and again, we approached this in a crab-like way – sideways. The breakthrough, we felt, was to have the extension on ‘his’ desk listed against his name in the internal directory, and this we achieved.

That Grahame and I did not have on our c.v.’s time spent ‘on Her Majesties pleasure’ in Pentonville prison, is due – thankfully, to our overreaching ourselves. It so happened, that our branch manager was retiring, and it being such an august occasion, the retiring event was occasioned by an outpouring of almost sincere well-wishing for a well-earned happy retirement, assisted by a fat pension.

Apart from signing his card as Ralph, I also sent a telegram, purporting to be from Ralph, in the Aberdeen branch, and I larded the message with references to all the good times they both had, when rising through the corporate ranks. Unbeknown to me Grahame also sent a congratulatory message, but for some odd reason, he’d made it as from a Rolf Van Dermonkton in Eindhoven. These were read out and, not surprisingly – the cat was out of the bag! Who is this Monkton fellow? Was the question being asked. And the trail went back to the desk in our office.

We didn’t get sacked; instead, we fudged it by blaming it on one of the temps who used to work there, and harbouring an insane grudge against the company, had concocted the whole thing. We, we trusting two, had been duped into believing there was such person as an R. Monkton; and we were almost believed. Not long after Grahame got his hearts wish, by being accepted for flight training in the R.N. While I, only seeing my stay in London as not exceeding two years, was again on the road, heading back to Australia.

But I sometimes lie awake at night, and wonder, if there is not, in an empty office in Hammersmith, a phone ringing – for Ralph Monkton.

We all did daft things when we were young I guess (most of us anyway). Very impressive trick. Reminded me of Major Major Major and the Soldier in White in Catch-22 🙂 I worked in a lab in a factory next to the Thames and at lunchtime we used to go down to the river and find an empty lighter barge and play football inside it (they made great 5-a-side courts) I remember when I first heard Derek and Clive when my friend brought round the live album. I couldn’t believe the things they were saying but we peed ourselves.… Read more »

You’re spot on Guaj; and we are obviously of a similar generation – Catch-22 was one of my all-time favourites. You might also recall ‘the worst job I ever had’ by D & C. And re funny names; when I was at college in WA one of our teachers was obsessed with using ‘Fred Spong’ constantly when illustrating examples.

Ha-ha, the worst Job I ever had. Always thought there was something odd about the Titanic.

I became fixated on the Pete character, itself spawned out of E L Whisty. Once I began imitating that voice I found I couldn’t stop.

I think the 15% non-factual bit lies in the names. The name Ralph Monkton is very interesting. I think many of us who had worked in offices can relate very easily. Good work.
Supratik

Well, Ralph was entirely fictitious as the tale reveals, but the others are fictitious in the names, but represented real people. I would define the tale as ‘Faction’, mostly based on a real situation but given some added sparkle!
Thanks for the comment supratik.

Wait a minute, how do we know you are real, Dougie? This story is affecting my sense of reality. Maybe you really are Ralph Monkton and this story is just a cover. Hold on, my name is Ralph! This is hitting home. Anyway love how reality can be manipulated by just a couple of bored guys having a lark.

Well, Imagine my surprise (and a pleasant one at that), to find a notification in my emails from the erstwhile UKAuthors, and from your good self C.W. I can only say that I’m both humbled and gratified by your appreciation of the surreal aspect of open plan office work. But having re-read my piece I was struck by the many imperfections in its format, so I’ve had a go at updating it – which is the version now showing; and I hope to go through all my old work here and do a likewise update. In the meantime may I… Read more »