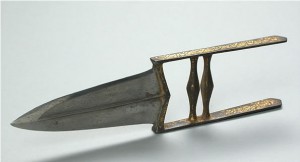 You’re the Tiger and you need to make a kill. A young female Chital, so elegant it hurts. Aware your success rate is less than ten percent you plan for months. A high risk strategy. If you bungle it you’ll need to move on and stay low, maybe for years. Tigers are patient.

You aim high to prove you’re top predator. Tesco’s Mereway doesn’t come much higher. A carpark bristling with CCTV to the west, the busy ring road north and Danes Camp sports complex east. Limited cover. Shrubbery by the path running under the roundabout to Tewksbury Close. Woodland lining Clannel Road and forested land around the rail tunnel entrance backing onto Yeoman Meadows. Deciduous trees mean winter is out. Late September to October is best. When the evening light is fading.

Careful. You’re so careful. Observing. Learning your territory and the habits of your prey. In Tesco’s colourful aisles you study until you know every square foot, each camera and the best viewpoints for following marks. Regular visits, but not every day. Carefully chosen times. Frequent changes of clothes. Just shopping for food, cheap jeans, toothpaste. Domestic stuff. An everyday punter. Invisible.

You approach the Tesco complex from different directions in randomised ways. By car. Parking it in varied bays, casually noting CCTV locations on the way to and from the store. Make sure not to linger, stuff the bags in the boot and go. By bus. Disembarking from a number 10 at the bus shelter to approach from the north or taking a 12 and getting off at Abbey Centre, approaching from the south west. And of course, by foot from Tewksbury Close, Yeoman Meadows and Hill Farm Rise. Surreptitiously spying for cameras hidden in leafy places, looking for potential blind-spots. Teaching yourself about the pedestrian walkways and the lay of the woodland fringe along Clannel Road. Always relying on memory and detailed notes made back home. NEVER taking smart-phone photos.

Early June, the trees are in full leaf. You’re ready for the next stage. Tracking. Already you know more than Ninety-five percent come and go by car. The well-used pedestrian-cum-bike path from Tewksbury Close offers the best prey choice, but its top-end risk. Punters rarely walk to Yeoman Meadows with shopping bags where you have deep cover, but you only need one. Your best bet is to look for marks using a regular route. You figure most potential prey will come by foot or arrive by bus and walk home with their purchases. You just need to find one going in the right direction.

You use two methods to check for potential prey disembarking at the bus shelter. Memorising timetables to arrive by car when a bus comes or getting on one somewhere near the town centre. Then you “go shopping,” following a target from parallel aisles while loading your trolley.

Over the next six weeks you build a pattern of people who regularly walk home from the store. You make a spreadsheet on your computer of punters and their typical time windows. You even know the routines of dog walkers and their breeds. You choose attack locations and plan possible routes where you can follow a mark’s progress from a distance and intercept them at each “kill point.”

You have three locations. In the trees behind the library, for people coming from path behind the carpark. The forested area near the Yeoman Meadow-Clannel Road junction. The bushes by the path to Tewksbury Close near the subway. You make “dry-runs,” following someone using your chosen route to see how close you are when they pass the place you’ve picked to pounce. You limit the number of checks to avoid being noticed.

You particularly like the Tewksbury Close option because you can track prey by following a route which initially sets off in the opposite direction and doubles back on a path under trees well away from the intercept point. Being near housing it has the highest risk, but you figure the continuous noise from the heavy traffic on the nearby roundabout will drown out any screams. Another bonus is the higher number of “young mums” regularly using the path. You designate them: alfa; beta; delta, etc.

In mid-July you have completed your work. Plans are in place. Now you abandon the area completely during the school holiday. Kids go pretty much everywhere they shouldn’t. Too many curious eyes. You hunker down, running your plans over and over in your head and on home-made computer simulations.

Second week in September, school’s back. The mornings are dew laden. You make your first visit to Mereway in seven weeks. You do a shopping recce to see what might have changed. Looks pretty normal, only the warmer clothing they wear is different. You spot, beta and feel a warm twinge of recognition. You don’t follow her movements, that’s not why you’re here. Just familiarising.

You return a week later. Its early evening. You think you might see delta, a skinny blonde who shops around this time. In the ready-made meals aisle someone bumps their trolley into your backside. When you turn around, a pretty brunette offers a friendly smile and apologises, blaming herself for not paying attention. You “okay” it.

As she moves away you wonder if she came by bus. You decide to follow, but you’re too late and you lose her. Later, while you’re on the checkout you see the brunette in the small items queue. She’s seventy-feet ahead of you, heading for the exit. You watch her go, annoyed because you still need to pay. Near the exit she stops and takes a smartphone out of a pocket. You catch up while she taps out a message. When she’s finished you’re ten paces behind. Taking the right-hand door she is unaware you’re there. You go left, but you watch her as you head for the car. She takes the path towards Tewksbury Close. Maybe she’s the Chital you’ve been waiting for.

Two days later, Thursday, you return around the same time and spend a long while doing a “weekly” shop. You cover most of the store zig-zagging to different areas, feigning searches for items. After forty-five minutes you’ve been in the store longer than normal. You leave without seeing the brunette.

Next day is Friday and then the weekend. You know people change routines on Fridays and weekends. You plan to try again about the same time next Tuesday. Mondays are usually quiet. If the brunette doesn’t show it’s a miss and you’ll need to alter visit times. You have your target list to work on:  alfa, beta, delta etc.

Tuesday evening you arrive by car. You leave it at the back of the carpark so you have plenty of time to look for the brunette as you approach the store. Over the weekend you tried to put the idea of her as the Chital out of your head, but her face flooded your mind. You wheel your trolley around the store randomly collecting items. Totally focused on finding her.

From the teas section that runs, along a back wall, you can view the length of each aisle as you pass. You see her at the end of the milk section. Wearing a light beige puffer coat with a black fur collar she’s dressed down, but easy to see. You grab a box of tea bags and head for the checkout. Trying to walk casually, you go to the car and execute the move you planned.

Taking your time you drive out the carpark towards the exit on the roundabout. Patiently negotiating the hectic traffic, you take Towcester Road. At the next small rotunda you go left onto Leicester Way and drive to the entrance to Tewksbury Close. You park in a lay-by, where you can see the entrance to the path from Tesco. You pretend to make a phone call. After ten minutes you see her. Without looking your way she turns to her right and heads to the houses at the end of the close. She is your Chital.

Back home you finalise your plans. From tomorrow, you will carry the antique Katar dagger your Great-Great Grandfather stole from a dead soldier. The razor sharp, “Tiger tooth” you’ve been obsessed with since you were a child. You will be ready for when the opportunity arises.

This is a disturbing piece, G. Colours of American Pyscho here! Hope that’s not why you’re exiled overseas now.

But seriously, you have brought together all the elements needed to keep the reader engaged; there’s the infusion of the tiger, the chital and the dagger, elements of India, and the analogy of how a tiger tracks its prey works well.

I was left wondering which soldier had been robbed; was it a sikh soldier?

Just a couple of punctuation queries again for example:

You spot, beta and feel a warm twinge of

Hello B
Although I know this place well (my daughter shops there) I haven’t any intetion of carring out those plans 🙂
I was trying to put myself in a psychopath’s mind
Actually it was interesting but I think he’d get caught
Eg is the brunette an undercover cop?
I may write her side of the story one day
I really appreciate your comments

They are called Tiger’s Tooth daggers. And in those days there were some which were made from the tiger’s tooth. You can pick up really good examples with engravings and filigree for around £100. They were used by the sikhs and the moguls and became standard issue for the former.

Some people like our serial killer neighbors march to the beat of a different drummer. You got the thrill of the hunt in this piece. I knew 3 young women in a writers’ workshop back in the 90s who were each working on their own novel about a serial killer.

Hi CW, I must admit if my neighbours were serial killers I’d probably move. But then???? how do I know they are not (I have my suspicions 🙂 )

Thanks for reading this, I really should get around to expanding this to a conclusion.