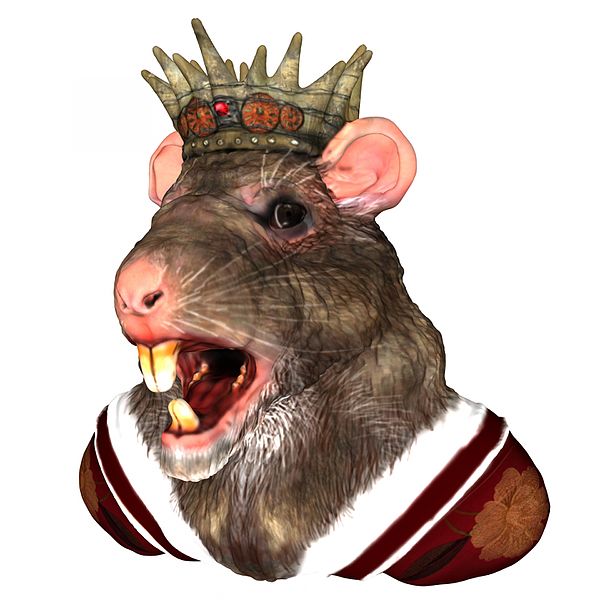 Re-named and re-posted with a few mods

At the oil works, they told us we weren’t allowed to bring weapons onto the job anymore. The management stuck notices up all over the place telling all three shifts we had a week to get them off the premises. After that, they said, they’d do a full search. Anybody found with anything iffy in their locker would be out the door. Instant dismissal they called it. They even had union backing. Not that we needed telling. After what happened to Hawkeye Stevens, all the guns and stuff were back home before any of the notices went up.

I never liked night shifts, especially when the machines were shut down and it was all quiet. That’s when you’d hear ’em. Rustling; scratching; creeping about above you. Then you’d catch a glimpse of one out the corner of your eye running along a girder into a dark corner. You’d pick up a sack or move something and one would run out with a squeak. Scared the living crap out of me every time.

We used to carry an iron bar or a lump of galvanised pipe in the long pocket on the side of our overalls, just in case we cornered one by accident. Rats make a hell of a noise when you corner one. Best thing is to whack it before it jumps at you. I used a broken piston rod from one of the diesel generators. Found it in a skip outside the engineers’ workshop.

Some blokes kept catapults in their lockers. They’d use them to take pot shots at the rats when things were slack. I tried it, but I’m a useless shot, so I gave mine to my boy.

Usually they fired ball bearings they’d stolen out of the engineers’ stores. My mate, Mad-Mick Donovan brought in a bloody great bag of marbles he had from when he was a kid. With three girls and a vasectomy, they were no use to him at home.

‘Got a big fucker right up the arse with one of me tiger eyes,’ he’d say, just about every break time.

Then, Jock McAdams brought in this shooter. An old Webley air pistol he bought at a car-boot for a couple of quid. It wasn’t much good, but when he managed to kill a rat with it things got competitive. Some geezers brought in old air guns they had when they were teenagers.

Joe Barnes and his mate, Hawkeye Stevens really got the bug. Joe picked up a competition pistol from somewhere. It looked like a bloody Luger. So Hawkeye came in with an air rifle. Natch, Joe had to go one better and he bought some Jap thing with a Winchester pump action. Regular arms race it was. They couldn’t bring real guns of course, but those air rifles were bloody lethal. Everybody kept well out the way when those two went on the hunt.

Despite their fire power, I don’t reckon they killed many rats. The factory cats were much better at keeping the numbers down. Didn’t matter much to me who killed the vermin, so long as they were dead. To me, a rat was a rat: except, Big Sid.

Big Sid was King Rat. The Godfather. Blokes used to tell stories about seeing rats as big as cats on nights, but I never saw any. Most were the size of the ones our tabby dumped on our doorstep from time to time. Big Sid was different. He was enormous. More like a Coypu with ears. Even the feral toms steered clear.

Everybody knew Big Sid, he was very distinctive. Not your normal, grey-brown colour. He had a white flash in his back, a bit like a Nike tick, but it weren’t his appearance that was special. He was bloody fearless; even seemed to search us out. He’d sit on a girder or gantry pretending to wash his face – nonchalant like. He’d let you get really near him. Then, whoosh . . . gone.

He turned up one day out of the blue. A rumour went round he’d escaped from some research lab. It weren’t long before we started seeing little Sids running about, with their tell-tale GT stripes. We kind of admired his cheek and pretty much left him alone. Joe and Hawkeye wanted his blood though, but they never got close.

After a few months, Joe gave up, but Hawkeye was obsessed. He hated Big Sid. He came face-to-face with him when he was on my shift. Sid just stared at him without moving. The rest of us watched Hawkeye as he squatted down and crept as close as could, like he was Rambo or something. He lined up his rifle and took aim. The instant his trigger finger tightened Sid jumped off the girder and disappeared. Everybody knew it would happen. We pissed ourselves laughing. Hawkeye took it really hard, even started staying behind after his shift was finished to hunt Sid down . . . until the silly bugger forgot to clock out one night. Got a warning for claiming unauthorized overtime. He calmed down after that.

In the second weekend of January we had the three-day annual maintenance shutdown. We had Monday off with pay. That was the weekend Hawkeye disappeared.

Nobody missed him straight off. His wife was away looking after her mum who’d just come out of hospital after a stroke. When she got home on Wednesday evening, she assumed Hawkeye was on nights, but when he didn’t come home Thursday morning she started to worry. Before she had a chance to do anything the shift manager phoned. He told her to remind Hawkeye to get a doctor’s certificate if he planned to stay off sick after Thursday, otherwise he’d have his pay docked.

It was another three hours before anybody thought to look for Hawkeye’s motor in the work’s car-park. If he’d a decent one, instead of a bog-standard Ford Escort, someone might’ve noticed it before. There was always at least a dozen blue Escorts in the works car-park day and night.

Turned out, Joe Barnes was the last person to speak to him and it landed him in deep shit. Hawkeye’d asked Joe to clock out for him. He said he’d seen Big Sid at the back of Silo thirteen and wanted to stay behind while it was quiet, “to get the bastard once and for all.” I went all cold when I heard that.

There’d been riots in Lagos, and a big seed crushing plant got torched. The company got a contract to ship in twenty-thousand tons of Nigerian peanuts for urgent processing. Silo thirteen and five others were chock full with ’em.

They said one of the security blokes broke down in tears when he saw the walnut stock of Hawkeye’s rifle laying across the walkway over silo thirteen. The only sign of Hawkeye was his footprints in the dust.

Took two days to remove the auger from under silo thirteen and clear enough space to get the skips in. They’d only filled two when someone saw Hawkeye’s legs jam in the outlet. It was a dodgy job getting him out without getting mown down by an avalanche of peanuts.

I didn’t see him, but Tom Robbins, the first-aid man (Christ knows what they thought he could do) said he looked very peaceful. Unmarked yet somehow all skewed: flattened like. Not surprising, I suppose, considering he’d had the best part of four thousand tons of peanuts sitting on him.

Word was, at the autopsy they found every bone in his body was crushed or broken. Apparently he had peanuts in his mouth, stomach, lungs, ears, nose, even up his jacksy. The sheer weight of them they said. Poor bastard.

The management never allowed silo thirteen to be used again. Nobody went near it after it was de-commissioned. We never saw anything of Big Sid after that and there were no more Little Sids. Some of his first-born that’d grown up were around, but they weren’t a patch on their father. We assumed Hawkeye’d got him.

Six months later, Bill Mellors, one of the leckies, came into the tea room one morning looking as white as a sheet. Shaking he was. He’d gone up top to fix a conveyer motor. He’d only seen Big Sid sitting on the side-wall of silo thirteen, hadn’t he? Looking down into the big empty space. Ran off as soon as he saw Bill. It really freaked him out.

I left a little while after that. The firm was cutting back. I took redundancy. Got a better job in the new maltings on the harbour. Process operator. Got me own computer terminal and everything. Good money too. I kept in touch with a couple of old mates though. They told me Big Sid was always seen in the same place. On the side-wall of silo thirteen, looking down inside it.

Then, about a year ago, I got a call from Mad-Mick.

‘Guess what, we found Big Sid dead in the executive car park. One of the cats was dragging his body around and dropped it in a puddle.’

‘Yeah, but here’s the best part. When we examined him, we found two of Hawkeye’s pellets lodged right inside his scrotum.’

‘That explains why Big Sid was always up on silo thirteen.’

Hi, guaj,
I read this the first time around and it kept me hooked right up until the penultimate sentence. It’s probably me being dim but the bollocks bit didn’t seem to resolve the story. It was good read otherwise though. 🙂
I’d be interested to see what others think.

I kind of based this on place I got my first job, I was in the lab., but a lot of stuff went on there. I’m chuffed you liked this.

My thoughts were, that was probably where Sid was sitting when Hawkeye shot him in the scrotum. Maybe he went back to try and figure out what happened, who knows what goes on in a rodent’s mind 🙂