Gold fever and ducking out of responsibility. 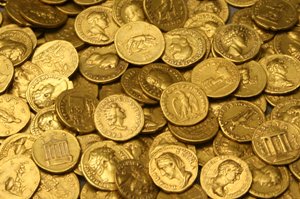 Among the many cartoons of old
there is one that represents greed.
He is the duck Flintheart Glomgold,
who is a ruthless character indeed.

He is the rival of Scrooge McDuck
the richest miser in the whole world.
Both are prepared to take pot luck
in their quest to accumulate gold.

Glomgold wears a red and black coat
and a dark tam o’shanter on his head
although Scrooge McDuck can gloat
about a better apparel, blue and red.

They met in the Californian gold rush
and amassed an immeasurable pile.
Of what they achieved they will gush
but their selfish avarice does rile.

Because he knows he won’t be skint
McDuck can afford to be more generous
whilst Flintheart keeps hold of his mint
and finds that giving alms is onerous.

Because we know they are not real
we tend to dismiss their enterprise
yet we must not condone the zeal
of those who hold the poor in a vise. *

* A vise (American English) or vice (British English) is a mechanical apparatus used to secure an object to allow work to be performed on it.

Well done Luigi,
you are right we must try not condone such antics but I suppose it will always be like it as it always has been , that the poor will be squeezed in the proverbial vice,which is a vice.Well portrayed Luigi,
Be lucky, Peter.

Thanks, Peter.
All the best, Luigi.