Sweet and Sour at Number Ten 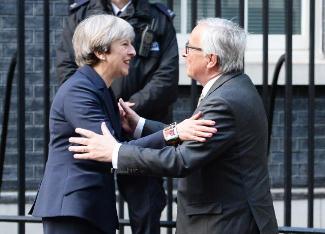 Jean-Claude Junker has said on the news
the English language is losing importance
and it is French that he may want to use
but it looks as if it’s an act of vengeance.

He also told Merkel that Theresa May
with her demands was as hard as nails
but she lived in a galaxy that is far away
and couldn’t accept that Brexit will fail.

She countered that it was a cowardly plot
to damage her chances at the next poll,
a most devious plan not too hard to spot,
but being difficult she would not play ball.

Luigi this made me laugh – but you nailed it bang on in just a few words….
regards
gerry.

Gerry, I believe that if we couldn’t find the funny side in these situations we would have to cry.
Best, Luigi.

OMG I detest that git Junker. Mind you, I have no time for other politicians either. As you say, we have to laugh. They really think they fool us but we view them with contempt. A bunch of something that rhymes with bankers. 😉

My sentiments exactly, Alison. Thanks for letting me know your views.
Best wishes, Luigi x

Sweet and Sour at Number Ten
by
ionicus