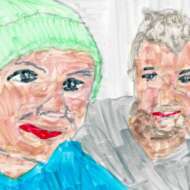 Mentalelf
sixty one, battered and often broken. I sometimes write drinking whiskey or stoned. I never rewrite. I firmly believe words are just words without emotion or life driving them. Anyone with a good lexicon can be labeled "wordsmith" but really they just know how to rhyme long words. I make no such claims for myself. But I love poems that tell a story, which everyone has buried somewhere its just a matter of waiting long enough for the diamond to appear.
This user account status is Approved
About About
Posts Posts
Comments Comments

Absurdist, humanist, socialist, sometimes nihilistic but not in a Schopenhauer sense. Aspiring Buddhist for the past 24 years,

I came to love literature through sex and drugs, I was a bit of an educated lout, but I met a girl many years ago 1970's, who I shared speed with and then sex. She was doing Lit at Uni and had a copy of the plague beside her bed, I flicked through it and she said "take it, read it".

That brought me on a journey of discovery that will never end. Writing, reading its magical. It's all there its all we'll need to survive, and aspire by inspire.

I love more modern stuff. Camus, Kafka, the Beats especially Ginsberg who's howl gave us Jean Genet by overturning obscenity laws. Kerouak although I preferred Dharma bums to on the road. I love Bob Dylan... his words... Shane Macgowan, Behan and Mangan. Rimbaud, Tom Waits. Sam Hunt from New Zealand. On here I like Rick Gammon... he has stories to tell. I did a philosophy degree which is also a voyage through literature.

I am in love with Lotte Lenya although I'm one hundred years too late to woo her. She sang of real life and had a passion. I would have worshipped her. Her voice is magic and she exudes sensuality.

I'm fascinated by the hedonistic crazy creative life in Weimar Germany before Hitlers Jackboot destroyed it. Kurt Weill's "The Threepenny Opera" is inspiration although my German isn't really good enough I love it anyway. And Lotte was in it.

I've done much with my life, some good some less salubrious, I've travelled and lived and worked in fifty-two different countries, My favourite in the world is Japan where I lived for a year.  I'm originally a Yorkshireman but you can't tell now, I have a Northern accent and a Kiwi heart. I write quite a bit about some of the beauty and some of the bile I've experienced. I've been to war, and I've sat at the feet of the Dalai Lama as he taught me about the beautiful "Heart Sutra". I am an aspiring Buddhist, have been since 1996. I once sat at a teaching from His Holiness the Dalai Lama in New Zealand, after there was Q and A, someone asked His Holiness "what's enlightenment like", he replied "I don't know I'm just a beginner"!

So I've travelled the greatest of violence and the ultimate of peace.

Having said that I lapse and fall into the odd bottle of Jamisons.

I spent five years working in the Orkney's and Shetlands in every winter, places of great mystery and fire. I saw a ghost there and storm lashed beauty.

I had a son who I loved with all my heart, I lost him to a rare bone cancer at eighteen years of age, he was quite brilliant and would now in his world plan be doing a Doctorate in Medical Research. So I suffer nihilism, which bleeds through what I write sometimes. Oh... I also have PTSD ever since people with big bombs tried to end me. Hence the "Mental" side of elf. Which means I sometimes write in the grip of a temporary insanity.

Oh nearly forgot, many of my writings have lines, just one, from a song or poem that has gripped me, It isn't plagiarism its homage and an Easter egg.