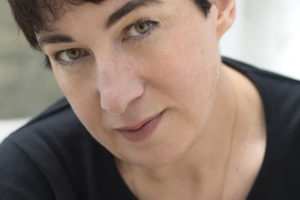 Joanne Harris was born in Barnsley in 1964, of a French mother and an English father.  She studied modern and medieval languages at St Catharines College, Cambridge after which she taught for 15 years until the publication of her third novel, Chocolat, which was made into an academy award nominated movie in 2001.  Since then she has written seven novels, a book of short stories, Jigs & Reels, and a cookbook, The French Kitchen, co-written with Fran Warde.

and she tweets at @Joannechocolat ‏

1) When did you first decide to write?

JH-I think I’ve always written, ever since I learnt to read and realized that
stories didn’t always go where I wanted them to…

2) What was your first success?

JH-A long poem called “the Frog on the Log”, first “published” when I was 11
years old (5 copies, hand-written, with illustrations) and sold to my
schoolfriends for sweets (the best publishing deal I was going to get for
the next 20 years).

3) What comes first- character or plot?

JH-It depends – but a book needs both if it is going to survive.

4) Before you became successful how many hours a day did you spend writing
and how many do you spend now?

JH-As long as I could afford to spend, both then and now.

5) How long does writing a novel take for you?

JH-As long as it needs to!

6) The short story seems to be very much in vogue at the moment, what made
you decide to publish a collection of them? (Jigs and Reels) and how did
it compare with writing a novel?

JH-I’d been writing short stories alongside my novels for years, and I guess my
publishers just decided to take the risk.

7) What do you know now, that you wish you had known before you gained
success?

JH-I wish I’d known how to deal with the Press.

8) What are you reading at the moment?

JH-AMERICAN GODS, by Neil Gaiman, plus a whole bunch of Whitbread shortlistees.

9) Which is your favourite Joanne Harris book?

JH-Probably “Five Quarters of the Orange”. Not the most fun to write (that was
probably “Holy Fools”), but it’s the one I’m most happy with.

JH-There’s no such thing. If I’m at home, my day has a sort of structure based
on my daughter’s school day. If I’m travelling, anything could happen…

JH-The voodoo of the half-written page.

JH-Having to think of it as a business when all I want to do is enjoy it.

13) What book do you wish you had written?

14) Your website has an eclectic mix of things, from the latest goings on
in your garden through to official book news and even a message board
where people can ask you questions directly- do you think it is important
for writers to have a web presence?

JH-Not necessarily, but think it’s very useful, both for the public who want to
know what’s going on, and for the author, who doesn’t want to duplicate too many
interviews…

15) Who are your favourite authors?

16) How did it feel to see your characters come to life in the movie version of Chocolat?

17) When is the next book coming out?

18) Your books all have striking covers, how much input do you have into the actual design process?

JH-My designer, Stuart Haygarth, consults me quite closely on the covers to  find what would be most appropriate. Most of the covers so far have been based on assemblages of items which are put together and then photographed. The cover of “Sleep, Pale Sister” was designed to my specifications by the Ruralist artist Graham Ovenden, using one of Graham’s pencil drawings
and a colour filter.

20 What one piece of advice would you give to aspiring authors?

JH-If you don’t enjoy what you are writing, then no-one else will.

Thank you, Joanne,  for answering these questions.