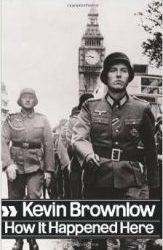 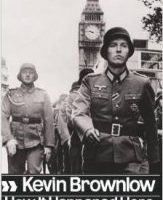 It Happened Here not only predates other alternate history films The Philadelphia Experiment, If Britain Had Fallen and Fatherland, but in modern reviews is generally compared favourably to them, despite its almost non-existent budget. What do you think is the key to its critical success?

They actually made a number of these films in the silent days – the biggest of which was The Invasion of Britain directed in 1918 by Herbert Brenon. Sadly the film was junked at the armistice, all but one sequence with Ellen Terry. The critical reaction to It Happened Here at the time was mixed – those that liked it probably responded to the element of authenticity.

What lay behind the choice a woman for the lead role, and also the significance of her Irish nationality?
I suspect I was influenced by Mrs Miniver. I always saw a woman in the lead. Her Irish nationality was an accident – a result of casting a friend, born in Dublin.

Would you be happy for It Happened Here to be re-made by Hollywood?
There was a flicker of interest from Hollywood at one time. In the right hands, they could make a magnificent job of it.

The message of recent film The Reader (2009) seems to be ‘We are all responsible’. How do you feel this relates to that of ‘This could have happened anywhere’ in It Happened Here?
I would like to make an epic documentary on this subject. There are so many things the average audience just hasn’t been told. I still find what the Germans did beyond comprehension, but now I find we did some of the same things. Because we won we can conceal them. For instance, we maintained the naval blockade on central Europe for nearly a year after the armistice in 1918 to get better peace terms at Versailles. I daren’t put the figure down of those that perished in case I get it wrong, but it was a lot more than died at Hiroshima. We went to war to protect Poland. We failed to protect Poland in any way at all. In the end, we handed Poland to an even worse dictator than the one we had declared war on. Between 55-70 million people died during this period. It all makes me more of a pacifist than I was to begin with.

You began making the film just 11 years after the war. Did British sentiment at the time influence your decision for the film’s message? Were you hoping to change opinion, or at least make people ask themselves the question ‘What would I have done’?
Yes, I couldn’t believe how smug we were with the oft-repeated phrase ‘It couldn’t happen here’. We now know it could and in places like Ireland, it did. I must admit that I asked myself – ‘It’s eleven years since the end of the war. Is there anyone still interested in the subject?’

Do you think your career was damaged by the adverse reaction of the Jewish press to It Happened Here?
It didn’t need the Jewish Chronicle,etc. Just a few people muttering about It Happened Here being a Fascist film was enough to put producers off us for life!

It took you and Andrew Mollo several years to raise the money to make your second film together. Do you think this was, in part, caused by the controversial nature of your first and would you have made It Happened Here any differently?
No, we wouldn’t have made It Happened Here any differently – although I would like to fix some of the performances and adjust the end. The difficulty in raising the money was due to Winstanley being a profoundly uncommercial project.

A brilliant idea was the start of It Happened Here, but what drew you to the story of Winstanley?
We kept trying to find a project that excited us. The novel of Comrade Jacob had that quality of Englishness we respond to, had that military element that we both find fascinating. One of the French critics at the time of the film’s release said we regarded history as others regard science fiction – it’s true.

Was the choice of black and white film a stylistic or a financial one?
If we could have afforded 35mm colour, we might have been tempted, but l6mm colour in those days looked miserable.

Why do you think you are drawn to the media of film rather than another form of creative expression?
I have been in love with cinema since the age of 11. It is a religion with me. And recreating the past is the nearest you can get to living through it.

You’ve done a lot to debunk the myth of jerky silent movies and shown their positives in your books and TV documentaries – how they transcended language, often had live musical accompaniment, etc. Do you think there is a place for the silent movie for today’s cinema-going audience?
If a Multiplex had the courage to reserve one theatre for silent films, and did it properly, with beautiful prints and live music, it would undoubtedly draw. We showed Lubitsch’s Old Heidelberg (1928) at NFT-2 with piano accompaniment a few years ago and 25 people came. Next door, a few months later, we showed the same film with Carl Davis conducting the London Philharmonic Orchestra and 2,500 people came. Live Cinema, as we call it, is in effect a new form of entertainment because you need to be 85 and over to have experienced it the first time round.

It is now possible to download /It Happened Here/ on torrent sites and I see that Photoplay Productions is in the process of setting up a website. How has recent technology affected your work and ability to reach people?
DVD is a godsend – you can slip a feature into your pocket rather than stagger around with ten reels of 35mm. And if it has been transferred properly, it can project beautifully. All sorts of forgotten titles are becoming available. At the same tine, of course, all sorts of important titles are being overlooked.

You’ve said you became a film historian rather than a director because of the difficulty of viewing your own films. Do you think this would have been different with bigger budgets, or is it more down to being a perfectionist?
I set out to become the second Orson Welles. That proved rather more difficult than I anticipated! If I had had bigger budgets, I expect my control would have been reduced and my disappointment with the film would have been greater. Most artists have difficulty watching their own work. I find watching the work of others far more rewarding.

Congratulations on being awarded the Mel Novikoff award in 2007. In your acceptance speech, you questioned whether cinema had advanced as much in the past thirty years as silent film did during its 30-year reign. Why do you think this is?
In the silent era no one knew what wasn’t possible. It was inevitable that after the pioneering period, once talkies had settled into a routine, audiences would no longer expect impressive aesthetic advances. I suppose CGI is the advance mostly associated with our time. That and the unfettered use of extreme violence, which alienates me from a whole area of modern cinema.

What do you think about where cinema is heading now, with the popularity of IMAX/3D movies, special effects, etc?
These sort of films have always been with us – some have been marvellous. But think of all the outstanding social films we can see nowadays. And isn’t it incredible to think that Ken Loach is still making uncompromising pictures after nearly half a century?

You’ve had the chance to meet many interesting people in the course of your work – Beckett, Kubrick, etc. Who would you most like to spend an evening with?
The beauty of the first two-thirds of my life was that I was able to spend the equivalent of an evening with most of the picture people that interested me – and how incredibly rewarding that was! That generation has now gone and I am as old as they were. One of the figures I regret missing was D W Griffith (Oscarwinning American film director 1875-1948).

What is your favourite film of all time?
Napoleon.

You have achieved so much already, but is there anything you would still love to accomplish?
I would like to make a documentary on Douglas Fairbanks. He got me hooked on film history, so as I came in with Fairbanks, it would be neat to go out with Fairbanks.

Finally, what one thing would you like to tell a budding film-maker today?
I would advise him to find another form of work, but I don’t believe that myself.