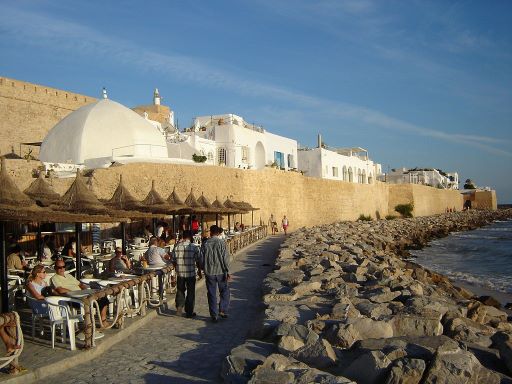 “Souk it to me”, said Jessica when I told her that we were going to visit the market in the medina of Hammamet.

She is my niece, a vivacious and adventurous 20-year-old whose looks attract a great deal of attention everywhere.

She’s a would-be comedian and also a fan of old TV shows like the Rowan and Martin’s ‘Laugh-in’.

She was in a jocular mood and went on to say:

“Promise me, uncle Jeremy, that you won’t sell me for fewer than twenty sheep”

“Whatever! Just make sure I am not undersold, or I’ll get the hump.”

She was following in her father’s footsteps whose sense of humour she had inherited not admitting that neither his jokes nor hers were particularly amusing.
As they were family I put up with their idiosyncrasies.

She had been unsure and fearful of entering the walled city as she had been told that it was a dodgy place, best avoided.

It is true that souks are a maze of alleys and narrow streets, and it’s easy to get lost. They are the traditional market places and are often divided into sections for the various trades. Herbalists, spice sellers, metal workers, tanners, and food markets are congregated on trade-specific streets.

I had been equally anxious on my first visit, years earlier, and on that occasion I had been accompanied by Abdul, the waiter from the hotel where I was staying who had offered to act as my guide.

I tried to instil confidence in Jessica by telling her that I had been reassured by that experience and I that had found the local traders helpful and friendly.
What decided her was that Abdul’s son Ali would be our guide this time.
The fact that he was a handsome boy of her own age was the main factor.
◊ ◊ ◊
The variety and abundance of enticing and attractive products promised to be a cornucopia to satisfy every kind of taste.
While I was mainly interested in acquiring a luxurious carpet full of rich and colourful patterns, I knew that Jessica would want to make a bee-line to a boutique or a jewellery shop.

I was pondering on whether I ought to start haggling on an embroidered rug for which the vendor was asking far too many dinars, when I realised that my niece was no longer with us.
Both Ali and scurried in search of the missing girl but could not find her and I panicked at the thought that she may have been kidnapped or lured by some unscrupulous criminal.

I turned a corner and a young female motioned me towards her boutique. I was about to dismiss what I thought to be an invitation to shop at her premises when I heard giggling from within.

The laughter was unmistakably that of my mischievous young relative who, having avoided my vigilance, was now ensconced in that dress shop attired in traditional Tunisian clothes and wearing gorgeous, and expensive, trinkets.

“Be a good sport, uncle, get your wallet out.”
Then she whispered in my ear, “They’ll think that you are my sugar daddy.”

I felt a great relief that she was safe and paid out an extortionate amount; haggling was out of the question in a classy establishment like that one.
◊ ◊ ◊
Back at the hotel I felt on safer ground and the rest of the week passed quite peacefully; food, drinks, beach and camel rides.

At the beginning of the second week Jessica didn’t come down at breakfast but I thought nothing of it. She had probably gone for a swim; the sun was shining and it was a warm morning.

I was enjoying my full English and a glass of freshly-squeezed red-orange juice
when the concierge came to deliver a note. It was only then that I felt a sense of unease.
A ransom demand, I thought immediately.

“Dear uncle”, the message said, “don’t worry. I’ll be back in time for our return to England. Ali has asked me if his offer of three camels was acceptable to me and I have said that it was satisfactory. We have gone to Nabeul to buy them.”

A nice easy read in your trademark style, Luigi. This one looks familiar, have you posted it before? I seem to remember there was also a follow-up.
I felt there was some occasional stiffness in the narrative and dialogue that could be loosened up by contractions, such as ‘we’ve’ instead of ‘we have’, ‘you’re’ instead of ‘you are’, ‘she’d’ for ‘she had’ etc.
Small things anyway. Always good to see those from the poets corner showing their fiction skills as well. 🙂

This was the first of a number of episodes that I have posted on ABCtales. I don’t recall having posted it here, though. As far as the contractions, it is sometimes better not to use them if the word count is what matters.
Thanks for reading and commenting.

A Tense Situation
by
ionicus